President of the Russian Federation

Zyuganov (ジェガノフ Jeganofu) is the President of the Russian Federation. Worrying about the abundant resources within the Special Region would dilute Russia's influence, he involves himself in a number of plots as he wants to simply get rid of the Gate. However, like all of the others superpowers, he secretly conducts dimensional gate research in order to reap profits from the Special Region.

Likewise, with the rest of the world superpowers, he wants to gather deep intelligence on the Special Region, and authorizes an operation to kidnap Piña, Bozes, Rory, Tuka, and Lelei when they visited Japan in order to extract information from them.

Zyuganov's appearance in the Manga 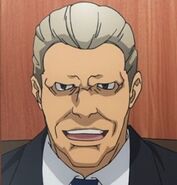 Zyuganov's appearance in the Anime.
Add a photo to this gallery
Retrieved from "https://gate.fandom.com/wiki/Zyuganov?oldid=25094"
Community content is available under CC-BY-SA unless otherwise noted.