The Warrior Bunnies (ヴォーリアバニー Wōria Banī) is a race of Humanoids in the Special Region.

Warrior Bunnies are very prolific and fertile, with each female capable of bearing several babies per pregnancy. Even then, the male to female ratio is extremely low, to the point that males of their species are incredibly rare. Nonetheless, Warrior Bunnies are able to breed with other races. When they find a male that interests them, they would stay with him until they get bored or the relationship cools off. Due to this, the concept of couples and families are alien to them and they raise the children communally, as women of the tribe. The few males that are born are chosen as family men in order to father a pure-bred female that would eventually become the Queen.

Since long ago, the Warrior Bunnies first migrated from their original dimension to the Special Region through Gate. For long, they have been regarded as a cruel, violent and debauched race. For the most part, this is true. In the north-eastern plains on the continent where their kingdom once stood, the tribes would hunt one another.

Tyuule eventually learned that the Empire did not keep their promise of sparing the Warrior Bunnies and plotted to kill Zorzal to avenge her people. She did so, although she died in the process.

Warrior Bunnies are known for superhuman agility, reflex and speed as well as highly skilled warriors and assassins. Furthermore, they are shown to be fast enough to outrun armed soldier's reaction to dodge their shots effectively like the case when Deliah tries to stab Yanagida not before dodging 3-4 shots from his pistol after outrunning his reaction time to aim his pistol at her. Their big bunny-like ears also enable them to have enhanced hearing in which they can hear sound and conversation at a very far distance. They also possess superhuman strength as an average warrior bunny like Deliah is strong enough to send a muscular human or orcs to fly at a far distance from a single kick.

Warrior Bunnies doesn't need night vision equipment to find their targets in the dark due to their innate night vision are very good. Their enviable arm strength, which could easily draw a bow to hit a target within 200 meters.

It is shown that one average Warrior Bunnies is equal to five trained Imperial soldiers, though their small numbers meant they were unable to fight the Empire on an even level.

Their fighting power is so strong that the JSDF states that the Warrior Bunnies are superior to even the JSDF Special Force. Few races are capable of being on equal or better fighting terms, the only exception being the Apostles themselves.

A warrior bunny in battle against Imperial Army soldiers.

Griine is perhaps the most bunny looking of the Warrior Bunnies

Warrior Bunnies fought and hunted each others in the past 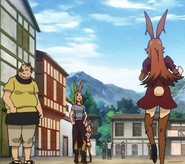 Tyuule in Chapter 83 intro art. Naked looking out of the window of the Prince's bedroom.
Add a photo to this gallery
Retrieved from "https://gate.fandom.com/wiki/Warrior_Bunnies?oldid=26110"
Community content is available under CC-BY-SA unless otherwise noted.