Alive - Anime and Manga(for the time being anyway)

Before the War against the Warrior Bunnies, Tyuule is an honorable and brave warrior queen who cares deeply for her people. After the war and many years of torture and pain has warped her fully.

Tyuule is full of hatred and plans to tear apart everything into bloody war as revenge for being considered a traitor to her people for giving herself to Zorzal, by framing Piña for the murder of the released Ginza slave and then the chosen murderer for the task is revealed to have plans of revenge against Tyuule for selling out their race. She's been feeding Zorzal lies and fostering his ambition, knowing full well he's an idiot incapable of ruling competently or leading an army. As revenge for being considered a traitor due to giving herself over to Zorzal to protect her people, she's planning to stage the death of a liberated Ginza slave at Piña's hands to, as she sees it, enrage Japan into a Roaring Rampage of Revenge that will create a long, bloody war in which she hopes her family and Zorzal will all die. It should be noted that she is the smartest member in Zorzal's force since she is the only one capable of comprehending the extreme magnitude of the JSDF modern military and superior technology over the Empire while Zorzal and his cohorts are too foolish and delusional to see it through.

After killing Zorzal at the cost of her life, she thinks about her feeling for Furuta and satisfies of her revenge before she dies. At the same time, she also shows great gratitude for the JSDF for helping her destroying the Empire by making it completely weak and nearly powerless for a century.

Tyuule has long waist-length silver hair and bright red eyes. Her most notable feature is her bunny ears.

Three years before the appearance of the Gate, Tyuule ruled over her people, the Warrior Bunnies, in the plains northeast of the Empire. When the Empire waged war on them with the objective of gaining slaves, she and the Warrior Bunnies fought savagely against their enemies. While they were able to kill many Empire's soldiers plus their superior fighting power, their enemies ultimately won due to vast their superior numbers. As a last resort, Tyuule offered herself to Prince Zorzal in exchange for the safety of her people.

Tyuule endured Zorzal's abuse believing that her sacrifice allowed her people to be safe but ultimately became aware of the hatred the Warriors bear towards her and the assassination attempts on her. This embittered her, making her feel abandoned and plots in the shadows to manipulate Zorzal into starting a war against JSDF which will destroy everything.

When the JSDF invaded the Empire and ravaged it‘s army, Tyuule was still serving as Zorzal’s sex slave. However as she soon heard news of just how catastrophic the Empire’s losses were, she planned on using the JSDF to achieve her revenge by gaining Zorzal’s trust to have him lose everything. She managed to achieve Zorzal’s trust after protecting and nursing him back to health after being beaten up, aiding in Assassination Attempt on Noriko Mochizuki and the coupe against Molt. As she did this, Zorzal started to trust her more and more which enabled her to convince him to launch fruitless attacks on the JSDF which did nothing but cause the Empire to lose the majority of what’s left of their army and forced the Pro-War Faction to flee from the capital. As the months passed, Zorzal launched the Second Battle of Italica (to get rid of Pina and the Pro-Peace Faction) and the Battle of Marais (as a distraction for the JSDF). However despite achieving some sort of initial success in both battles, the plan eventually failed as the JSDF managed to wipe out the ambushing forces within a few hours and the garrison in Italica managed to hold off Zorzal’s forces long enough for the JSDF to intervene. As Zorzal watched what’s left of his forces being slaughtered, Tyuule took the opportunity to grab a knife and fatally stabbed Zorzal. Zorzal then snapped her neck before dying; ending the pointless war and finally redeeming Tyuule‘s image.

As the former queen of Warrior Bunnies, she is used to be the strongest warrior in her clan. However, years of tortures has decimated much of her former strength.

Sexual Cautiousness: Despite being Zorzal's most used sex slave, never in the story has she ever gotten pregnant despite Zorzal not caring if he did indeed get her to bare his child.

Inhuman Sexual Endurance: she is strong enough to effectively making a man who tries to rape her in the state of exhaustion. This is also the trait that makes Zorzal favor her.

She has a Warrior Bunny's supernatural speed, agility, and strength. 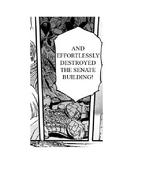 Tyuule's armor, a trophy of war, lies amid the ruins of the Senate

Bunnies are cute when eating 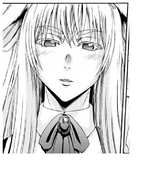 Tyuule takes an interest in Furuta

Tyuule offered her body to save her people in the past.

Zorzal meets his demise by Tyuule's hand in the light novel.

Tyuule hallucinates about Furuta taking her to Japan to live a happy life during the moment of dying after killing Zorzal.

I hate when characters are sacrificed for the plot. 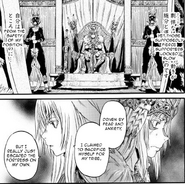 Tyuule remembering her shameful escape from her own fortress Manga Chapter 76 page 29.

Tyuule being rewarded for her honesty by Zorzal El Caesar Manga Chapter 76 page 30. 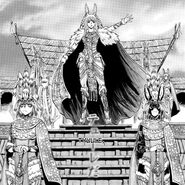 Tyuule in Chapter 83 intro art, naked looking out of the window of the Prince's bedroom.
Add a photo to this gallery
Retrieved from "https://gate.fandom.com/wiki/Tyuule?oldid=25803"
Community content is available under CC-BY-SA unless otherwise noted.