mounting for M2 Browning or other machine guns or anti-tank missiles.

The Toyota High Mobility Vehicle is a large, heavy-duty four wheel drive vehicle introduced by Toyota in 1995. The largest 4WD ever built by Toyota, it resembled the Hummer H1, and like the Hummer, was designed primarily for military use with the Mega Cruiser seeing duty as infantry transport, a light prime mover for heavy mortars, and mobile Surface-to-air missiles in the Japan Self Defense Forces. The military version as the BXD10, and the civilian version is known as a BXD20. Civilian uses incurred expensive taxes imposed by the Japanese government for dimension regulations and annual road tax obligations. It was available in Japan only at Toyota Store locations.

Exclusively sold in Japan, the Toyota high mob also was used by prefectural police and fire/rescue departments, and a limited number were sold to civilians. This vehicle was intended to test designs that would eventually make their way into mass-produced Toyota SUVs (like the Land Cruiser), but was financially unsuccessful for Toyota.

Based around a Japanese exclusive Toyoya Mega Cruiser civilian heavy-duty off-road vehicle. It can hold a substantial amount of people and equipment, 1+9 men to be exact. It has a strong resemblance to the US High Mobility Multipurpose Wheeled Vehicle (HMMWV).

The main role of this vehicle is infantry transport and because of that it has a payload capacity of 1500 kg. The vehicle can be mounted with various weapons like machine guns, anti-tank missiles, and others as defensive armament. It is also capable of easily bulldozing aside soldiers that use armored shields to block its path. 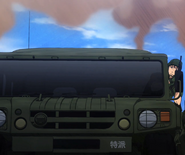 Add a photo to this gallery
Retrieved from "https://gate.fandom.com/wiki/Toyota_High_Mobility_Vehicle?oldid=25444"
Community content is available under CC-BY-SA unless otherwise noted.