Takeo Kurata  (倉田 武雄 Kurata Takeo) is 21 years old Sergeant of the Japan Self-Defense Forces, a member of the Third Recon Team and the driver of Yōji Itami's military vehicle.

An Otaku who has a moe fetish over Nekomimi (Cat ears) and Kemono (beast-like humanoid in general). When discussing otaku topics, he can chat happily with Yōji Itami, his superior.

He eventually develops feelings for Persia, a maid from Italica. Later in the manga and novel, she appears to return his feelings and the two are seen together more frequently.

Kurata is a skinny young man. He has short black hair and black eyes. He is commonly seen in his army uniform.

Not much is known about his history.

Kurata was present during the initial Imperial invasion during the Battle of Ginza. Unlike Itami, he didn't even think to intervene. After the incident, Kurata was assigned to the Third Recon Team, and drove the Toyota high mobility vehicle commanded by Yōji Itami.

During the engagement with the Flame Dragon, Kurata proved himself a skilled driver, capable of evading the dragon's deadly fire breath while taking control of the steering wheel. Kurata would later go on to fight alongside his squad at the Siege of Italica. After the siege, Kurata infiltrated the Formal Clan mansion along with the rest of the squad in their mission to "liberate" Itami after he was captured by the Rose-Order of Knights. There, it became apparent that the incident was a mere misunderstanding and the issue was quickly cleared up. During his stay at the mansion, Kurata became friendly with Persia, a cat girl maid whom he was immediately attracted to. Later in the series, it would appear that Persia returns his feelings.

Kurata served as the squad's driver until Itami deserted to eliminate the Flame Dragon alongside Yao Ro Dushi, Tuka Luna Marceau, Rory Mercury, and Lelei La Lalena. When Itami returned to the base, he was rather lightly penalized with a pay cut and reassignment to the Special Region Resource Investigation Team 101. After this, Kurata seems to have been reassigned to the JSDF outpost in Akusho alongside Mari Kurokawa. Both Kurata and Kurokawa were present during Zorzal El Caesar's coup in Sadera after the assassination attempt on Emperor Molt Sol Augustus, at which point Akusho was blockaded by the Imperial Army, essentially trapping Kurata and Kurokawa in the city with the rest of the inhabitants.

Basic Training: Like all JSDF personnel, Kurata has undergone basic physical and combat training, and is good physical condition. He is a competent marksman.

Expert Driving: Kurata seems to be extremely good at driving military vehicles, being able to dodge the attacks of a Flame Dragon.

Takeo Kutata introduces himself to Persia in Episode 7

Takeo Kurata introduces himself to Persia in manga chapter 14 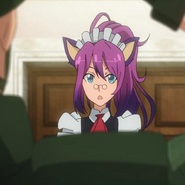 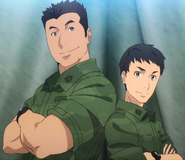 Retrieved from "https://gate.fandom.com/wiki/Takeo_Kurata?oldid=25486"
Community content is available under CC-BY-SA unless otherwise noted.