Gate - Thus the JSDF Fought There! Wiki
Register
Don't have an account?
Sign In
Advertisement
in: Terminology, Locations

Special Region (特別地域 Tokubetsu Chiiki, short: 特地 Tokuchi) is a term used by the Japanese to refer to the world behind the Gate.

The full geography of the Special Region is currently unexplored, and is currently limited to a part of the continent of Falmart, which is controlled mostly by the Empire. The JSDF-explored portion of the continent is bounded to the north by the mountainous Knappnai region and the Range of Ice and Snow, however, a map included in the manga shows that it includes a vast area beyond these regions. The Gate at Alnus is located roughly at the southwest of the continent, with the city of Italica to the north and the Imperial Capital of Sadera to the west. The Blue Sea is located to the southwest, bordered by the Kingdom of Elbe to the south, with the port of Proptor to the north. Other major vassal states include League and Alguna, to the east of Elbe, while the states of Rondel and Bellnahgo are located north of Alnus. The city of Telta is located to the northwest of the Imperial Capital.

While the exact size of the planet on the other side of the Gate is unknown, according to the Ministry of Defense's observations and study, a Special Region Year is estimated to be 383-389 days long, slightly larger than Earth's. Like Earth, the Special Region has one moon, and is part of a solar system that includes at least four more planets. It is also not clear if the Special Region is located in a parallel universe, or somewhere in the same universe as Earth. Uncertainty about this fact also makes it difficult to determine if the Special Region are occurring at the same time as events on Earth, or if the entire world exists in Earth's relative past or future, with the Gate acting as a portal through time, rather than just space.

In addition to normal humans, the Special Region is inhabited by a number of humanoid races, many of which are oppressed by the human majority, at least in the Empire. These races include typical "fantasy" races, most notably elves and goblins, as well as a number of people possessing animal-like peoples, such as the Warrior Bunnies, Medusas, (who suck life energy through their snake-hair), Djinn-like people with four arms, Sirens (similar to harpies), winged peoples, and those with deer antler.

Level of Technology and Magic

Overall, the level of technology in the Special Region is early medieval era. Gunpowder and firearms are unheard of and is seen as magical. Metallurgy is limited to forging and blacksmiths. Electricity and internal combustion are also unknown. Simple machines such as pulleys and levers are widely used. Warfare is mostly composed of human wave attacks and close combat. All aspects of life are through manual labor.

The concept of industrialization and mechanization is practically nonexistent. Ideas and concepts such as interchangeable parts, standardization of production, assembly lines, etc. are unknown. All products are hand-crafted by specialists and therefore time-consuming to create. Mass production on a large scale is virtually impossible and expensive. Natural resources for production such as ores, lumber and textiles, etc. exist in abundance, but the methods of gathering and processing these resources are slow and inefficient. Mining is done via pickax, shovel and manual work. Lumber is done by felling trees by hand. Metallurgy is limited to hand-forging. Petroleum and other sources of oil are mostly untouched due to the lack of internal combustion engines. Travel, transport, and communication is relatively slow and is limited to walking, horses, carriages, Dragon, and word of mouth. Medical technology is crude and often unsanitary or nonexistent, with the exception of healing magic.

In terms of maritime technology, as described in the sequel Gate: Weigh Anchor, ships are limited to oar and sail in terms of propulsion. There are no steam engines, steamships, steamboats, paddlewheel, or screw propellers. Scuba tanks and re-breathers are unknown. Navigation is done by the stars and primitive maps. Nation-states in the Avion Sea are shown to have created gunpowder and Cannons for naval warfare.

Due to the huge gap in technology level compared to modern Earth, the military, economy and overall standard of living is exceedingly primitive in the Special Region. This lack of technological progress is due in part to a lack of education and actual research. It is also due in part to superstitions and the disdain of that world's gods. Since the people are in fear of such deities, the resulting stagnation of technological advance is enormous. What little advancements in the sciences the Special Region locals have achieved, has taken them decades or even centuries to discover.

Much of the flora and fauna of the Special Region is similar or practically identical to those on Earth, among the species shown or referenced include humans, cats, dogs, rabbits, snakes, vultures, and numerous plant species such as trees or grasses.

In addition to those species similar to those on Earth, there are a number of typical "fantasy" species. In addition to specific humanoid races such as elves or goblins, dragons are also commonplace, including smaller dragons used as mounts by the Imperial Army, as well as the larger, more powerfulFlame Dragon.

Unlike religion on Earth, the gods of the Special Region are provably real entities which interact with the inhabitants of the regions, though they do not appear to have the power to directly manipulate Earth. Thus far, all inhabitants of the Special Region encounters are members of the same polytheistic religion, though some display signs of henotheism - the idea that other gods exist, but that your god or gods are stronger, and others are unworthy of worship. Some people may be chosen as apostles of a deity, gaining superhuman abilities in return. The middle name of special area locals indicates their patron deity. Luna stands for Lunaryur, Haa stands for Hardy and Ro stands for Rory.

Detailed political map of the national borders of Falmart.

An annotated version of the large-scale map of the Empire, with place names. 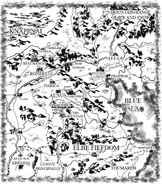 An annotated version of the large-scale map of the Empire, with place names.

A map of the Special Region continent of Falmart, controlled mostly by the Empire.

Map drawn by an inhabitant of the Special Region surrounding Alnus Hill.

A small scale map of the area around Alnus

Russian and US military imagining the battle between the Japan Self-Defense Forces and Imperial Guerrilla Offensive campaigns are similar to their wars against the Soviet–Afghan War(mujahideen) and Viet Cong in the past. However, they don't seem to realize that the Imperial Army is far more pathetic than they thought, Manga Chapter 72.

A US military official, who are resemble King Duran, Manga Chapter 72.

US and Russian army generals greets Wolf during the visit in Alnus Hill, Manga Chapter 72.
Community content is available under CC-BY-SA unless otherwise noted.
Advertisement