Prior to the Battle of Ginza, Emperor Molt had Colt Formal assemble his men to prepare for battle through the Gate. In the resulting battle, Colt was killed, and as a result, his daughter Myui ended up being the Formal Clan's leader. Italica's loss of military men also weakened the city severely.

Emperor Molt then sent the Allied Army to Alnus Hill to stop the JSDF, but in reality he sent them on a suicide mission so the vassal states could not rebel after realizing the Empire was helpless against the JSDF. Following the army's decimation by the JSDF after three assaults, the remaining survivors rallied under an unnamed bandit leader. Having witnessed carnage never seen before in their lives, they began pillaging and looting surrounding villages while also seeking to die for the hell they encountered on Alnus Hill.

The bandits eventually arrived at Italica and began besieging the city, but were unable to breach the walls surrounding the city. Piña Co Lada and a group of her Rose-Order of Knights arrived to support the citizens, believing that the JSDF were attacking the city. Much to her surprise, she found the remnants of the Allied Army who had turned into marauders.

3rd Recon eventually arrived at Italica for trade purposes, as Lelei La Lalena, Rory Mercury and Tuka Luna Marceau wanted to sell the winged dragon scales they had collected in the aftermath of Alnus Hill as they fetched a high price on the market. Due to being overwhelmed by the constant attacks of the bandits, when the 3rd Recon arrived, Piña asked for their assistance in the defense of the town. She placed them alone in the southern gate, believing the enemy would attack in full force there. Though Itami knew of her intentions, he did not place it in his report.

The southern walls had been highly damaged and the JSDF were placed alone there, as Piña believed they would be fighting for their lives. The eastern walls had been fortified, with a second inner wall in case the outer wall was ever breached by the marauders. Much to Piña's surprise, the bandits attacked en masse from the eastern walls, whereas the other walls saw little to no fighting. Piña was stopped by the slaughter of innocents, forcing Norma to intervene and save her life; however, he was quickly impaled by the bandits' leader and flung from the wall.

Rory, who was also stationed with 3rd Recon, was unable to contain herself due to the numerous deaths as a result of the battle and went straight to the carnage zone, prompting 3rd Recon to pursue her. By this time, the bandits continued taunting the defenders out to slaughter them, but Rory arrived first and tackled one of their stronger bandits. Shino Kuribayashi soon joined in the fight and the two women easily held off every bandit that attacked them, while Itami and Tomita took care of any bandits that tried to attack them from behind.

Upon stabilizing the situation outside, a single Cobra attack helicopter approached the enemies inside the gate. The pilot warned Itami that in ten seconds he would fire on the bandits inside, so Itami and Tomita grabbed Rory and Kuribayashi and put them out of harm's way. The bandits then looked at the helicopter perplexed, before it opened fire and decimated all of the bandits inside. Piña and Hamilton were shocked by the strength of the helicopter, with Piña commenting on how it denied pride, honor and made so much violence that no human being could withstand it.

The JSDF began sweeping the area, taking down any remaining hostiles, corralling any of the bandits who surrendered, and treating the wounded civilians.

Following the battle, Piña feared that the JSDF would conquer Italica and use it as another base of operations, stuck in her mindset of how such deals worked prior to the JSDF's arrival. During negotiations, Piña was shocked to learn that the JSDF simply wanted free passage and tax exemption on any purchases in Italica, which was to the Empire not even considered a victor's spoil.

In order to prevent some of the prisoners from being harassed by Italica's residents, the JSDF took some of them to Alnus, including Myuute Luna Sires, where they were allowed to work in the town under the close watch of the JSDF military police. Myuute soon found a job with the military police, working with fellow MP Rory.

However, several Rose Knights had arrived after the battle had been over, and believing the JSDF had conquered the city, attempted to attack them. Itami stayed behind to cover his men, as he did not want to breach the treaty and was captured by them. Piña was enraged to hear of Itami's capture and became paranoid that the JSDF would come in full force and raze the city, ordering Bozes to seduce him. However, the JSDF simply knew it was just a misunderstanding but still sent a team to retrieve Itami regardless, and when Bozes arrived, was incensed at how low she had to stoop to maintain honor only to realize it was unnecessary. As a part of further discussion, Piña and Bozes decided to visit Japan to see the world beyond the Gate and to continue discussions, although their visit was kept secret from Molt and Zorzal. 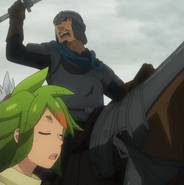 Rory smashes the defend formation of the bandits.

Shino shoots at a bandit that tries to sneak attack Rory..

Bandits desperately trying to shoot down the JSDF helicopters with a ballista only to get destroyed instead.

JSDF's 4th Combat Unit during their assault on Italica

JSDF force decimates the bandit in the light novel.

Cobra Attack Helicopter mop off the rest of the bandits.

The surviving bandits in the state of anguish and shellshock as they suffer from the trauma caused by JSDF fire barrage.

Rory battles the bandits with the JSDF support in the light novel.
Add a photo to this gallery
Retrieved from "https://gate.fandom.com/wiki/Siege_of_Italica?oldid=24438"
Community content is available under CC-BY-SA unless otherwise noted.