Gate - Thus the JSDF Fought There! Wiki
Register
Don't have an account?
Sign In
Advertisement
in: Characters, Humans, Female Characters,
and 3 more

Sherry Tyueli (シェリー・テュエリ Sherī Tyueri) is the daughter of the Tyueli family and later becomes Sugawara's official lover after he saved her by allowing her protection provided by the Japanese Embassy at the Jade Palace. After the death of her parents at the hands of the Oprichnina she becomes the adoptive daughter of Casel El Tiberius, a member of the Imperial Senate and a prominent member of the Pro-Peace faction.

She is now the Ambassador of the Empire and the Special Region in Japan after she migrated to Japan. She currently lives with Sugawara's parent.

At first glance, Sherry has a happy and child-like personality typical of someone her age, but sometimes she doesn't act like one. She does things that don't really suit her, such as flirting with Kouji Sugawara, which usually results in Sugawara scolding her for causing trouble for her parents. Sherry is also a surprisingly skilled negotiator, as seen when she haggles with a civilian on the number of pearls from her necklace she will pay for a meal.

After 4 years in Japan, she adopts more modern outlook and becomes skilled with the media.

Sherry is a very short girl. In the manga she has long, wavy hair and big eyes, while in the anime her hair is tied up into twintails.

When she reaches her teenage age, she is much more taller and her hair becomes longer.

Sherry is first seen teasing and flirting with Kouji Sugawara in a party at the Tyueli estate, held prior to a meeting between Japanese and Imperial diplomats. While Suguwara becomes friendly with Sherry, she becomes attracted to him, flirting with him at every (inappropriate) opportunity she gets. When Sugawara gives her a gift in the form of a pearl necklace, Sherry becomes even more enamored with him and becomes convinced that she is going to marry him once she comes of age, according to Imperial law, at the age of 16.

Sherry is forced to flee the Tyueli estate after Zorzal El Caesar's Coup, when her parents become targets of the Oprichnina. While Sherry escapes along with Marquis Casel, her parents sacrifice themselves to save their daughter and are killed. While Sherry is distraught, she does not lose her wits, managing to barter with a guard in exchange for food.

Sherry escapes to the Jade Palace, but she and Casel are initially refused entry to the palace. When the Oprichnina arrives, however, Sugawara desperately exits the palace and convinces the (Special Region native) guards to let Sherry through by claiming she is his bride-to-be. In Sherry's eyes, this "confirms" to her that Sugawara does, in fact, return her affections.

She understands the necessity of bridging relations between the JSDF and the Senators, which Sugawara underestimated in favor of the emperor. She used this and her innocent demeanor to further any appearance of a deeper relationship with Sugawara, who she is trying to court.

Despite her young age, Sherry possesses political cunning where even adults had commented in how Sherry will grow up to be a fearful adult; because of her age, Sherry's abnormal skills were seen as a "monstrous" to even adult politicians, such as Reiko Shirayuri, who had forbear themselves from making exorbitant demands where the level of reparations, from the Empire, were put the level of "satisfactory" for the Japanese. Sherry also takes advantage of her innocent appearance to predispose the Japanese government into helping her people into defeating Zorzal. 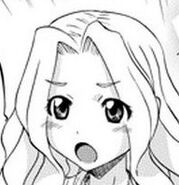 Sherry with Persia in attendence on her way to Japan as the Empire's ambassador in Light Novels. 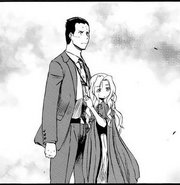 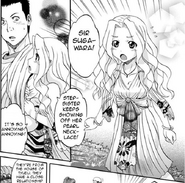 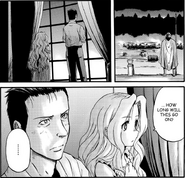 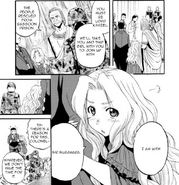