Alive - Anime (for the time being)

She was killed in the Second Battle of Italica by the Norra, The Pied Piper and a Haryo tribe member while trying to defend Molt.

Shandy is a girl with a cheerful personality. She also adores famous people such as Itami. She apparently adopts the use of modern terminology such as "LFTI."

Shandy is also very forgetful. When Itami told Shandy to close her eyes when the assassins came into the room, she opened them and was subsequently blinded by the flash grenade that Itami threw. Later on, Shandy overheard an assassin telling the inn servants to have Lelei wear armor and when she made her move after the first assassin was incapacitated by magic, she forgot body armor Lelei was wearing.

Like the rest of the Rose-Order of Knights, Shandy's loyalty lies with Piña Co Lada.

Shandy is a petite young girl with short hair that is tied into a ponytail.

An old man, who had seen the Flame Dragon once before confirmed its authenticity. Shandy then wrote a report from the information she gathered, detailing how Itami went to kill the Flame Dragon. However, according to Piña, Shandy had exaggerated it to the point where it sounded like an epic tale and even going as far as depicting Tuka as a male.

Later, as Molt questioned Shandy on who killed the Flame Dragon, she mentioned the party responsible for doing the deed. When he heard that Lelei La Lalena, who is both human and a native of the Empire was one of the people who had given her support, Molt decided to give all the credit to the young sorceress. This made Zorzal angry and he put her on his "to kill" list, hiring the Pied Piper to kill her.

Shandy accompanies Grey to Rondel, where he informs Itami of the situation. During the night, the three inn servants attending to them make their way to their room. Itami tells Shandy to keep her eyes closed no matter what. When the would-be assassins stab the beds, Itami throws a flash grenade, which blinds them and Shandy, since she opened her eyes anyways.

During Lelei's presentation, after the first assassin failed, Shandy moved in and stabbed Lelei in the chest. However, she survived, as she had worn armor since the inn servants had warned her to wear the body armor yesterday. Shandy is upset that she was uninformed with Lelei wearing armor, only for Itami to tell her that she was the first one to hear about it. Shandy recollects yesterday's events and realizes that he is right. When Tuka tells her that she messed up by not aiming for the neck, she becomes upset.

Shandy reveals that she attempted to kill Lelei to prove Piña's loyalty to Zorzal, who wanted Lelei killed, and that her life was in danger from Zorzal's dictatorship. She asks Grey to kill Lelei to prove his loyalty to Piña, but Grey refuses, stating that he is not up for the task, so she gives up in her attempts to kill her. Since she did not have any ill-will towards the group, Itami lets Shandy free.

She later attends Piña's coronation and is baffled by the new relationships between the JSDF personnel and fellow Empire citizens. She asks why the guys never come from her, only to be reminded by Panache that she was conned by the Pied Piper. 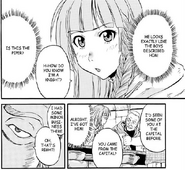 Norra (the Pide Piper) as a man fooling Shandy into attacking Lelei La Lelena at her masters presentation. 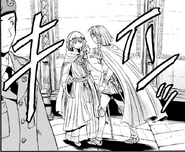