Gate - Thus the JSDF Fought There! Wiki
Register
Don't have an account?
Sign In
Advertisement
in: Terminology, Groups, Empire Citizens,
and 2 more

Rose-Order of Knights (薔薇騎士団 Bara Kishidan) is a knightly order of the Empire founded by princess Piña Co Lada with the approval of emperor Molt Sol Augustus. Most of the members are young women from noble families or old veterans who don't want to retire and don't have the pull to get good political appointments. Their level of training is higher that the average rank-and-file soldier of the Empire, effectively making them an elite combat unit of the Imperial Army. The knights that fight under the banner of the Rose are also well-known to be very open-minded people, which is why they are the very first imperial soldiers to have established friendly ties with the Japan Self-Defense Forces during the Japanese-Empire War.

When Piña was a child, she gathered a bunch of noble girls and started playing soldier. Eventually she managed to wrangle an actual military commander, Grey Co Aldo, to train them and by the time the events of the series came around, she became their leader.

The group allows men to join, with Norma Co Igloo as one of the examples, though the ratio of noble women still exceeds the number of noble men; along with Grey, the Rose-Order of Knights also have a number of elderly veteran soldiers.

While they are a group officially established by Molt Sol Augustus, the knights merely serve as a decorative purpose for the Empire's army where they are simply "honored guards". Even Emperor Molt admitted to Piña that he sees her group as a "plaything" due to his shallow-minded thinking. Only until the battle of Italica did some of the knights experience actual battle, and took their first casualty with Norma's death, but even then, he took down several bandits with his swordsmanship. They freely interact with the JSDF, sharing the same views as Piña; to bring peace to the Empire.

Despite being an honor guard and thus relegated for decorative purposes, the Rose-Order of Knights are extremely skilled in combat, being capable of besting both the Imperial Army and the Oprichnina, due to having skilled knights, their commitment to actually fight and their tactics. During the Siege of the Jade Palace, 300 members of the Rose-Order easily fended off thousands of Imperial soldiers and their Oprichnina superiors, taking few casualties in the process.

Due to being comprised of mostly noble women, they are often frowned upon by Zorzal and the pro-war senators due to their sexism. However, following the outbreak of the Imperial Civil War, they are considered by Zorzal and his faction to be the third most dangerous party, behind the Warrior Bunnies and the JSDF due to their superior fighting skills. Zorzal even ordered several of their members to be assassinated, only to be met with failure due to their fighting power and the JSDF's protection.

In the aftermath of the civil war, the Rose-Order of Knights are implemented as an official branch of the Imperial Army in honor of their contributions in the civil war, and to also replenish the depleted Imperial Army as most of them were forced to fight under Zorzal. 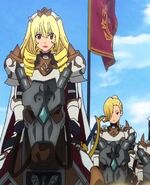 The Rose Order of Knights battled the goblin bandits during their initial establishment.