Gate - Thus the JSDF Fought There! Wiki
Register
Don't have an account?
Sign In
Advertisement
in: Terminology, Locations, Cities and Towns

Rondel is a major city in the Empire, Special Region, best known for the home of the Magic Academy and home to most of the master sorcerers of the Empire. The city was founded along with the magic academy by La & Elange, twin gods of study during their time in the Special Region when they were both still apostles. The city itself appears to be located alongside a major river or lake.

In the anime, the city has an architecture far differing from the Empire's, with structures constructed primarily of white stone, with conical or dome-shaped roofs typically painted bright blue or green. Circular towers and other round structures are extensively used, with the cities builders proving capable of building conical roofs the size of a large modern stadium, as seen with the meeting hall. It is likely that the structure was constructed with the aid of magic. In spite of the city's impressive architecture, the inhabitants are known to be poor planners, leading to the chaotic, difficult to navigate nature of the city.

The manga version of Rondel looks very different from its anime counterpart, having the appearance of a more typical city of the Empire, with numerous thatched-roofed structures constructed apparently out of wood and stone. Some larger stone structures, including the great hall of the Magic Academy and the city hall have columned facades and larger domed roofs, however, the city lacks the grandeur of its anime counterpart. The streets of the city are much narrower and more crowded in the manga than they are in the anime. The city is fed water through several large aquaeducts. The city is dominated by the massive walls of the research district of the magic academy, used to isolate the dangerous magic used by the master mages.

During the Imperial Civil War, they support the Loyalist and the JSDF making Zorzal brands the whole city as enemy territory for his force.

In the past, Rondel once had a library but the city was involved in a religious war where, in the midst of the bedlam, monotheists had burned down the library and much of the stored knowledge was lost that day.

The great meeting hall of the Magic Academy is used by masters of magic and perspective masters to present their latest findings. The structure itself is the largest in the city, appearing to be the size of a modern stadium, with a conical roof. The meeting hall in the manga is a much more modest structure, though still larger than most other building in the city.

The Research and Development area for masters working on new spells and other experiments with magic. Given the nature of magic in the Gate universe, which is unstable and difficult to utilize in for practical purposes, it is the site of frequent accidents such as explosions. For safety reasons, the area is isolated from the rest of the academy and the city. In the manga is located behind a large thick wall that dominates the rest of the city, making the isolation of the district much more apparent.

There are six ranks of mage (in the manga) : student, graduate, sage, master, expert, and arch-mage. Students first learn basic magic knowledge from any mage ranked graduate or higher. If the student passes certain tests, they will recieve a recomendation to be interviewed by an arch-mage whom they will hopefully then learn under as graduate to become a sage. Sages can be interviewed by a different arch-mage from another school. After that, a sage can become a master, which allows them to learn magic from another school. When a mage becomes an expert, he/she will not be limited in learning in Rondel and will be well-respected not only in the Empire but in others countries as well.

According to Lelei, the higher the rank the more chance the mage can access to archives in Rondel's archive as well as allowing to open school to teach others potential student in the magic art.

It is should be taken notice that the rank doesn't reflect the magical abilities of the mage since lower rank mage like sage can have more magical power than master, expert or arch-mage. The rank only reflects the research contribution and evidence during the academic conference 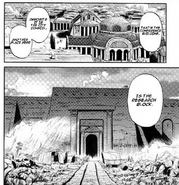 The conference hall and research district in the manga.

A view of Rondel from a tall tower.

A view of Rondel's waterfront, with the meeting hall in the distance.