Risa Aoi (葵 梨紗 Aoi Risa) is an artist of doujinshi catered to females and the ex-wife of Yōji Itami. Princess Piña Co Lada and Bozes Co Palesti are also quite enthusiastic about acquiring some of these Japanese "art books", much to several diplomats' dismay.

Risa is a woman with brown hair.

She is usually seen wearing glasses and a shirt track suit.

Since she is a manga artist, Risa is a very big Otaku much like Yōji Itami. She usually asks Itami for money and food. Even after divorcing him, she is still on good terms with Itami. She even admits that their relationship has actually gotten better than before.

She also likes cute girls since they are her inspiration to write her manga, as well as for her doll collection. This trait is shown during her first encounter with Rory Mercury, in which Risa scares Rory to the point that she refers to Risa as Hardy.

4 years earlier during Christmas, Risa proposed to Yōji Itami in exchange for feeding her, but they later divorced. Risa has a perpetual problem with money, exacerbated by the fact that she's also a massive otaku. Since she's a douijn artist, she only needs electricity and Internet to get paid, but she goes hungry as a result.

Risa was first seen sitting in her room, drawing manga and thinking where she should get more money. She later went to the city to spend some time with Yōji Itami's group and accompanied them to the Hakone Resort, where she was present during the entirety of the Hakone Incident. In spite of her lack of any sort of combat or tactical skills, Risa effectively prevented a second assault at the entrance to the Gate by posting on the internet the date and time in which Rory Mercury, Lelei La Lelena and Tuka Luna Marceau would be returning to the Special Region, causing a large enough crowd of civilians and potential witnesses to prevent any attacks by foreign agents. After the main characters had returned to the Special Region, Itami had Risa ditch the car they used somewhere in Tokyo, in spite of the fact that she does not know how to drive.

Back in Tokyo, Risa walked past a police car with Itami inside. She quickly moves backward and asks Itami what he did this time, being completely shocked. Itami tells her that all he wanted to do was go to a convention.

Manga Drawing: As a mangaka, Risa is experienced in drawing doujinshi manga.

Risa interacting Itami and his gang in her home. 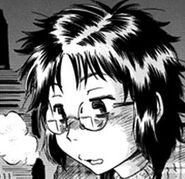 Which is more adorable?

Risa's attitude toward cute girl, much to Rory's horror

Risa makes a doll in Rory's likeliness, much to her reluctance.

The book, GATE, (C) Sentai Filmworks, Houston, Texas, page 71 that was in the boxed set of Anime DVDs in the box set of the English Dubbed Gate Anime, notes that Risa's last name is Aoi.