The Ogres, also referred as Scopedogs by the JSDF, are giant humanoid race that can be found in the Special Region.

Their large size and powerful physical strength than can swing a large hammer to kill dozen of soldiers in one swing. There appears to be some variation on what constitutes an Ogres, as some appear to be only several feet taller and bulkier than the average human, while others like the Giant Ogre used by Zorzal El Caesar are entire stories taller than any human.

It is shown that they can wreak and topple a Humvee easily or stun a tank temporary with the brute strength and huge melee weapon like giant hammer or club. They also quite durable especially when they are outfitted with full body armor since they can endure dozens shot from 50 cals until they drop death in which gives them some time to wreak some damages to the enemy, while rifles or pistols are impotent in front of them. This fact has been shown that in some cases, they can also be considered a threat, especially with infantry without support from armored vehicles or aerial support or lacking of explosives and anti-vehicle weapons.

However, their tremendous physical strength is also their weakness since they are very slow in battlefield in which giving JSDF or the Loyalist plenty of time to shower its with rains of bullets or arrows until the ogre can get close to fighting position.

The L7A1 tank guns fired 105mm/51 armor-piercing fin-stabilised discarding sabot rounds. Even the armored Ogres could not withstand a direct hit from those rounds at point blank range. The Ogres fell one after the other, with gaping holes blown in their bodies - Depiction of the absolute uselessness of the Ogres against tanks during the JSDF Blitzkreig Offensive, depicted in volume 8 chapter 8 of the light novel

Despite their endurance and heavy armor gives them resistance against bullets as strong as 50 cals, they are very vulnerable to explosive like grenade, anti-tank weaponry, explosive magic or cannon no matter how thick its skin and armor are since it only takes 3 to 4 grenades to kill one armored ogre, one blast from a tank cannon can blow a head or make a hole in the ogre's torso as well as the fact powerful magic user like Lelei can kill an ogre easily by blasting its with her explosive magic rapidly.

Another weakness of the Ogre is that its cannot distinguish foe and ally clearly since some Ogres getting their hand or leg blast off by JSDF tank often stomping on Imperial soldier while they are in deep pain making further damage to the Imperial troop.

According to Pina, Ogre is very difficult to control and they often attack the Imperial own troops not to mention outfitting them with heavy armor only making them more difficult to control since they are controlled through fear and the act of putting armor making them more rebellious against their human master. This is one of the reason why the Imperial troops quit using the Ogres in the past until Zorzal stupidly repeats this mistake in current time.

During the Imperial Civil War, Zorzal had these creatures tamed to be used as Shock Troopers and unsuccessful/ill-conceived Tank-Busters against the JSDF and the Legitimate government forces. Despite their critical weakness to the heavy weapons of the JSDF, they can be considered Zorzal's strongest military asset.

As the result, Zorzal's force often use them in ambush tank and soldier like the rest of the Imperial soldier rather than open field but due to their slow nature it takes dozens of them to bust a single tank or ambush a platoon of JSDF since they are slow enough to give a tank or JSDF soldiers plenty of time to blast 3 to 4 of them until they can get too close.

Apostles such as Rory Mercury and Giselle have little to no difficulty slashing an Ogre in half with their unique weapons.

An Ogre with armor during Pina rescue operation Anime episode 24.

Lelei fires her explosive spells at an Ogre in the light novel.

Armored Orges in the manga. 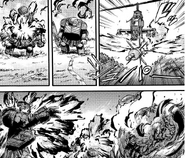 JSDF Cobra Helicopter destroys the Ogres.
Add a photo to this gallery

Retrieved from "https://gate.fandom.com/wiki/Ogre?oldid=24566"
Community content is available under CC-BY-SA unless otherwise noted.