Nanami is a newscaster by dedication, but with her inexperience in the field she is initially shy and self-conscious, serving as an anti-thesis to her aggressive and violent older sister. However, after having been allowed into the Special Region and finding out that unscrupulous colleagues and her own chief were manipulating the media reports to distort the facts, she develops a considerable degree of strength and dedication which drives her to a quest to root out the corruption in the Japanese media.

Nanami looks much like her sister Shino, down to her enormous bust size; the only things different on her are her hairstyle and clothing. She is usually seen wearing a white sweater, black jacket, and her camera.

Nanami is first seen interviewing pedestrians in Ginza about Prime Minister Motoi's sudden resignation when she and her crew noticed the growing number of people in the district awaiting the expected arrival of Japan's guest from the Special Region - Lelei La Lelena, Tuka Luna Marceau, and Rory Mercury - on their way back home. As the only TV crew in place, especially after the streets got overcrowded, she hoped to get an exclusive scoop by way of an interview with the girls. To her surprise, Nanami encountered her older sister Shino among the girls' entourage, who upon noticing the presence of the camera crew lost no time publicly denouncing the Amercian, Russian and Chinese attempt to snatch the three girls and their companions Princess Piña and Bozes, thus forcing their Presidents to abandon their final kidnapping attempt at the Gate's threshold. To Nanami's disappointment, though, she did not get the hoped-for live interview before the girls, Shino and the rest of their companions returned to the Special Region.

Later on, Nanami was one of the few Japanese reporters allowed into the Special Region to gather footage of the JSDF's activities and life on the other side of the Gate. However, she soon found that her colleague Kuzunari Komurazaki was anything but professional in his views of the JSDF's activities, and that her own boss, Chief Hidaki, hindered her efforts to choose the topics she could report on even after the danger of the Gate's continued existence became known. This was in fact due to Hidaki's sympathy towards Prime Minister Morita, a cowardly, weak-willed man who was ready to sell out Japan's sovereignty to an international conspiracy to take control of the Gate, especially to China's president Dong Dechou when the latter began to blackmail him.

Determined to report nothing but the truth, Nanami joined forces with Noriko Mochizuki on an internet website about the Special Region. At the same time, the Japanese Cabinet under Defense Minster Kanō's leadership decided to depose Morita for his act of negligent treason, and during a purge conducted by Hideyo Komakado, Chief Hidaki ended up arrested for child prostitution. With the removal of his censorship, Kuribayashi was finally free to report on the incursion of Chinese commandos into the Special Region. Following the closure of the original Gate, she quit working for her station and established her own independent online news studio.

Nanami Kuribayashi in the anime series

Nanami Kuribayashi in the manga series 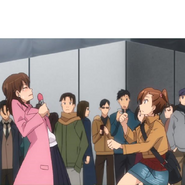 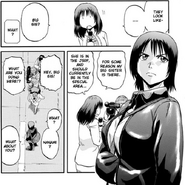 Retrieved from "https://gate.fandom.com/wiki/Nanami_Kuribayashi?oldid=25928"
Community content is available under CC-BY-SA unless otherwise noted.