During casual times, Myuute is a seen as a very sociable person when she had engaged in a friendly conversation with Yao in Alnus' bar, and is also frequently seen drinking with Rory. During times of trouble, she would go to Rory for help such as how she went to the demi-goddess when Myuute had sensed the incoming earthquake.

Myuute has green, feather-like hair and bird-like talons for feet.

During the Battle of Italica, Myuute assisted the bandits attempting to invade the town by using her magic to deflect the defenders' arrows. She looked on in awe and surrendered when the JSDF interfered and made short work of the bandits, becoming a prisoner of war. She, together with a man and three other women were selected to be taken to Alnus Hill for intelligence gathering by Itami, and to prevent any ill acts towards them by the vengeful townspeople.

Myuute had originally expected to become a slave only to find out that the Japanese does not promote slavery as she was later released. Initially unaware what to do with the unexpected freedom she was given, Rory approached Myuute and the Siren eventually got a job by joining Alnus' military police.

Myuute is a mage with the ability to repel arrows by generating gusts of wind. As a siren, Myuute's singing has hypnotic effects where it can lure people to her direction. This has a very hazardous side as it can occur involuntarily. Even when Myuute simply sings just for relaxation she would unintentionally cause a JSDF soldier to crash while driving. 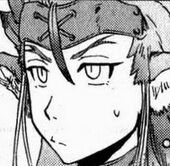 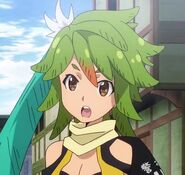 Myuute with Rory as a JSDF Military Police auxilliary at Alnus.

Myutte on patrol as MP

Myuute Luna Sires and Rory Mercury on patrol in Alnus from Anime episode 11. 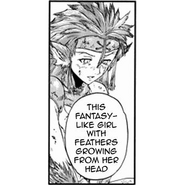 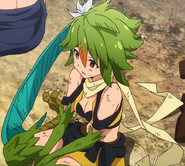 Cartoon of Myuute's meeting with Rory. Vistit the image page to read this is a whole Manga Page. 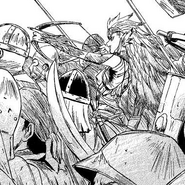 Myuute with brigands during the first battle of Italica, Manga Chapter 9 page 4.

Myuute and Rory during the earthquake in the Special Region.

Retrieved from "https://gate.fandom.com/wiki/Myuute_Luna_Sires?oldid=27532"
Community content is available under CC-BY-SA unless otherwise noted.