Molt Sol Augustus (モルト・ソル・アウグスタス Moruto Soru Augusutasu) was the emperor of the Empire and a former antagonist. In order to strengthen his power and influence, when the Gate opened, he immediately sent forces to conquer what lands were beyond it.

After Zorzal dethrones him to conduct his suicidal war against Japan, he supports the JSDF to stop his son from damaging the Empire.

Molt Sol Augustus is known for his stoic, extremely intelligent, and calculating demeanor, but also his cold and manipulative attitude. Unlike the other members of his family, Molt is in better control of his emotions in comparison to the temperamental Zorzal, paranoid Diabo and youthful Piña, whereas he always appears calculating and stoic, repressing his emotions and desires for most of his life just to not appear weak before the Senate and his other subjects. Even when fully prepared to vent his emotions, he is able to retain his composure and dignity, like when his own son was beaten nearly to death before his very eyes when the JSDF rescued Noriko Mochizuki. Moreover, he was calm enough to keep his emotion in check when Shino killed Zorzal's guards with a barrage of fire from her assault rifle, despite the fact that he was clearly and deeply shocked at the power of firearms.

Like all the emperors of the past, Molt is authoritarian, ruthless, extremely determined and inclined to take anything he desires through acts of war, territorial expansion or by bullying the allied kingdoms, but, unlike his predecessors, he also ensures that his ambitions don't make him blind to possible betrayal by his subjects and allies. Many of his machinations have the express purpose of diverting or expose all possible traitors and conspirators hidden among the ranks of the imperial nobility, so that he can deceive and punish all of them later. Not even the members of the nobility of the Empire's vassal kingdoms are considered trustworthy by him, in fact, he considers them all as individuals bound to the Empire not by an oath of loyalty and subservience but by the fear of being destroyed and enslaved. Despite his ever-suspicious and cautious attitude, he tends to underestimate certain individuals present in his court, like his family members and their slaves, who in the end turn out to be the very people who were conspiring behind him from the beginning.

Although he is a haughty elitist and a first-class manipulator, Molt holds the health of his nation to heart and he believes that only a constant territorial expansion is really capable of keeping the Empire prosperous and rich. The greater good of his nation is among his highest priorities and he's ready to challenge any enemy to achieve his goals. However, more than once in the past he has made it clear that according to his point of view the greater good of the nation does not necessarily coincide with the good of his people. For him, everyone is expendable for the sake of the war effort and the glory of the state. For him the high number of casualties among the imperial soldiers and the civilians is just a small price to be paid, a price for which he has never shown particular concern, considering the senseless massacre of the Battle of Ginza and the scorched earth policy that has been carried out by his order. He firmly believes that a nation that loves too much his own people and that is always concerned about the welfare of each individual citizen is bound to grow weak and finally collapse, crushed by the weight of its self-imposed responsibility. When he learned of the great concern of Japan to recover all of its citizens who were captured by the Imperial Army in Ginza, he thought to have finally discovered the great weakness of the enemy nation - the excessive love for its people; but over time, and many failures later, he began to understand that his preconceptions were not fully justified in the case of Japan and this prompted him to change his mind about the importance of the welfare of the citizens.

Molt: "Zorzal. When the war began, nobody could have expected so many unexpected developments. Since things are not going according to our desires, we are best served by ending hostilities before the damage becomes too severe."
Zorzal: "The Empire can still fight!"
Molt: "All the more reason to end this sooner rather than later. Once we can no longer go on… perhaps there may not even be the time for talks."
Zorzal: "What happened to the pride of the Empire?!" — Molt shows his rationality and realism toward the futile war against the JSDF while vainly trying to knock some senses into his son's knuckle head, depicted in volume 5 chapter 1 of the light novel

Molt lacks, or at least overtly lacks, the sadistic and bloodthirsty nature of his son Zorzal. Molt is intelligent enough to weigh political reality against a desire for personal, petty revenge. He is willing to admit defeat and negotiate with the enemy rather than stand proud, fight a losing battle and risking straining or completely depleting the Empire's resources. After proclaiming he had finally found Japan's weakness, Sugawara asked him if he would like to test Japan's might again. Molt knew by this point that he could not fight anymore, and rescinded his statement, as he knew this was a war that neither side desired and that if he continued the war, the Empire would be utterly devastated, which he did not desire.

As a military strategist, he is shown to lack insight and wisdom, clinging to the traditions of old where he implemented a scorched earth policy to deny the JSDF resources, unaware that they had a single supply point at Alnus, which all JSDF personnel returned to at the end of each day. His scorched earth policy created distrust amongst the populace, and did nothing to stop the JSDF from advancing further; even Diabo stated that Molt was leading the Empire to ruin with his useless policies.

After his recovery, he becomes more benevolent, mellow, far-thinking and more humble since he steps down from being an Emperor so his daughter Piña can lead the Empire to the brighter future. During her coronation, Molt told her that he did not care what she did with the Empire, either by keeping it together to fight Zorzal or splitting it up, as long as the Empire could survive in the future. He also knew that he needed to step down and let someone more capable rule the Empire, as he didn't want it to fall down the same path that Zorzal was taking it down. Unlike most other members of nobility, Molt was quite open-minded in other areas of the Empire, stating that he regretted relegating Piña's Rose-Order of Knights as an honor guard, admitting that its knights were some of the best soldiers that the Empire could offer, even though most of them were women.

Molt is an elderly man with light blonde hair and a beard, and sharp blue eyes. He also wears an ornament on his head that resembles a crown and noble clothes when in public.

In order to strengthen his power and influence, he sent soldiers through the Gate to conquer whatever lands they would encounter there while disregards the warning of Casel and pro-peace senators to be cautious about the unknown beyond the it. This proves to be his undoing since he cannot anticipate the tremendous military power of the JSDF over the Empire. As the result, he lost 60% of his military after two disastrous Battle of Ginza and the First Battle of Alnus Hill.

Molt is first seen sitting on his throne ordering scorch earth tactics to slow down the JSDF, despite his retainer's protests. Suddenly his daughter arrives and started talking about Alnus because the army that was sent there faced a miserable defeat and that the Alnus hill is being invaded by enemies. Then she asked him what they should do. He asks her order to scout the enemy position and she agrees.

Later on, Piña wakes up Molt as he is sleeping to talk about the "earthshakes" that had just occurred. Molt dresses up and meets with Kōji Sugawara, Japan's representative in the Special Region. Zorzal comes in and talks to Molt about the "earthshakes," which inquires Piña to ask him how he knows of it. Zorzal brings up a slave who is one of the Japanese captured during the Ginza incident, which enrages Itami. Molt gives no reaction when Shino Kuribayashi kills most of Zorzal's soldiers and when she brutally beats him up. When Kōji tells him Japans cares for the lives of their civilians, Molt believes that he has finally found their weakness while at the same time admitting that the Empire has zero chance against the JSDF.

During a banquet, Molt drinks wine which Tyuule had Bouro poison, and falls severely ill. Zorzal takes over in a military coup. Molt is taken care of, but essentially becomes Zorzal's prisoner in the Imperial alace, along with Piña.

Itami leads a rescue operation to rescue Piña, and Molt if possible. Molt is rescued and brought on the Humvee. As the group escapes the capital, Molt wakes up, claiming that he cannot rest when he is being carried around like luggage. Itami informs him that the pro-peace senators have already been evacuated to Italica, and that they should be there the next day. Molt is extremely impressed with the Humvee, as taking a horse to Italica would take a week, while the Humvee could get there in less than two days. Piña asks him to tell Zorzal to stop, but Molt tells her that Zorzal will not listen to anyone, and that a civil war is inevitable. Molt agrees to Japan's plan and appoints Piña as his successor, and that she can do what she wants with the empire. He later attends Piña's coronation and formally appoints her as the new queen of the Empire.

"Is that why you think you can easily gain the throne? When this war ends, the Emperor will step down with it. But he won’t stop pulling strings once he steps down. He’ll give the throne to a know-nothing like me so he can play me like a puppet and hold the real power behind the country. That’s probably what he was thinking. You showed too much of your talent. The Emperor already knows what you’re up to." — Zorzal indicates that Diabo was too much intelligent to be manipulated by Molt, showing the reason why he cannot be chosen as successor depicted in volume 3, chapter 8.

Swordsmanship: Molt is a king, so he had undergone training since young and would be able to adeptly use a sword in battle. 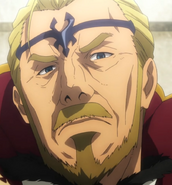 Molt is confined to a wheelchair after the end of the Imperial Civil War, a couple of months ago. 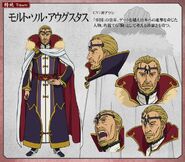 Add a photo to this gallery

Retrieved from "https://gate.fandom.com/wiki/Molt_Sol_Augustus?oldid=25282"
Community content is available under CC-BY-SA unless otherwise noted.