Mizuki Kōhara (幸原 みずき Kōhara Mizuki) is a Japanese National Diet member, who questioned Itami and his visitors about the Flame Dragon.

Kōhara is an opportunist who takes advantage of every opportunity to further her political career where she begins to accuse the JSDF of iniquitously sacrificing civilians, of the Special Area, while fighting the Flame Dragon. Kōhara barrages her opponent with questions as a way to get them to speak poorly of the JSDF, which she seems to dislike. She also believes in being professional, scolding Itami and Rory for being nonchalant and disrespectful, respectively. Kōhara also seems to use her age to her advantage, where she would tell youths to respect their elders; this came to backfire as Kōhara was initially ignorant of Rory's age where the Diet member was disconcerted after learning how much younger she was compared to the demi-goddess.

Kōhara is a middle aged woman who wears a white jacket with black edges, in the manga she has short black hair, while in the anime she has long brown hair and lipstick, she also has two earrings.

When Itami returns from the Special Area, in front of legislature, she tries to castigate the JSDF's role in the death of civilians during the escape from the Flame Dragon. She angered when Rory called her "little girl" but eventually silenced after figured out Rory's actual age. 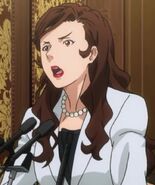 Mizuki Kōhara in the Anime. 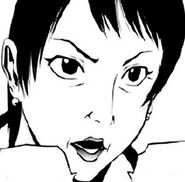 Mizuki Kōhara in the Manga.
Add a photo to this gallery
Retrieved from "https://gate.fandom.com/wiki/Mizuki_K%C5%8Dhara?oldid=25098"
Community content is available under CC-BY-SA unless otherwise noted.