Mizari (ミザリィ Mizarii) is a winged woman working as a prostitute in the Akusho region.

Mizari has a very laid-back personality. She can be quite air-headed sometimes, however she is like an older sister to her female friends.

Mizari is an extremely beautiful young woman with long blonde hair and a beauty mark near her right eye. She wears an ornamented red tunic. Her most notable features are her pure white wings and busty breasts.

She first appears in the red-light district, revealing herself as a whore. She asked Kurokawa to give her condoms so she can continue her jobs freely without the risk of unwanted pregnancy. Mizari later informs the other prostitutes of the district of the JSDF humanitarian efforts. This resulted in them becoming regular visitors, coming for both condoms and medical treatments.

Her name is an ironic pun on her fate, as misery is the state she lives in. It is implied that Kurokawa was right to mention that smoking opium (or some Special Region equivalent) constantly is the only thing that keeps her going. Her beauty mark is also placed in the so-called path of tears - in some cultures, people with marks beneath the outward-facing corner of the eye are considered to be unhappy in their lives, shedding many tears.

Mizari in the manga.

Mizari looking for Kenzaki (Special Forces Lieutenant) during the bombing of the Senate.

And she finds him.

Mizari on introductry art of the Threat of War Chapter. 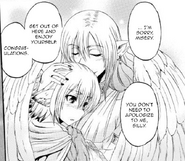 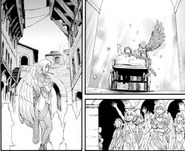 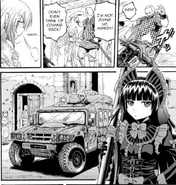 Rory Mecury saves Mizari as Itami and the girls arrive in Ashuko district of the Empire's capital.

Add a photo to this gallery
Retrieved from "https://gate.fandom.com/wiki/Mizari?oldid=24287"
Community content is available under CC-BY-SA unless otherwise noted.