Gate - Thus the JSDF Fought There! Wiki
Register
Don't have an account?
Sign In
Advertisement
in: Article stubs, Humans, Female Characters,
and 4 more

Mimoza is voiced by Fumi Hirano

Friendly but somewhat accident prone since she easily trips on Arpeggio's books in a clumsy manner. Fond of saying, "My my my!" . Furthermore, she also quite absent-minded since she mispronounces Lelei's name as Lily for few occasion.

Fifty years ago, Mimoza La Mer was once a winsome woman with a comely figure. In the past, she wore a sultry mage dress that exposed part of her bosom

In the manga, she doesn't wear a hat.

50 years from the present, she and Rory Mercury journeyed together. According to Episode 19, Rory assigned her "homework" on researching and discovering why there is a vast variety of different races in the Special Region. Based on the creation myths and folklore of the various peoples, the answer to this "homework" was that all the races originally came from the direction of Alnus Hill, and therefore the Gate.

She also explains the Ceremony of Three Nights why Lelei La Lalena and Yōji Itami are married pointing at Lelei and Itami while winking saying by sleeping in the same room together for three consecutive nites you announce you are married.

As a Sage and used to fight alongside Rory, she is considered to a powerful mage in her own right, much like Lelei.

At some point in the past Mimoza dueled Cato toe-to-toe, with the battle resulting in a stalemate.

Magic Staff: she carried a magic staff in her youth as her weapon. 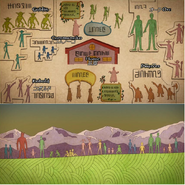 Mimoza's homework on the orgin of various species, the answer the GATE Anime episode 19.

Mimoza in the manga.

Mimoza in her youth fighting alongside Rory.

Cato in his youth as he tried to strip Mimoza's underwear.

The result of Cato's antic.