Gate - Thus the JSDF Fought There! Wiki
Register
Don't have an account?
Sign In
Advertisement
in: Humans, Male Characters, Characters,
and 2 more

Internal Minister of the Empire

Marcus (マルクス Marukusu) is the Internal Minister of the Empire. He is Emperor Molt's trusted retainer.

As a retainer of Molt he is completely loyal to him. In exchange Molt trusts him too.

He does not think highly of Zorzal, despite how he is supposed to be Molt's successor, where Marcus would secretly call him a fool when no one is around.

Marcus later, as Zorzal was branded as a traitor, had evinced contentment as Molt had chosen Piña Co Lada as his successor.

Marcus is a middle aged man, with bald head and no eyebrows. He wears casual clothes, not really important.

He first appears in front of the Emperor, Molt Sol Augustus, reporting that the allied Kingdoms have been annihilated by JSDF. Later, he informs Zorzal that there was strange activity on the senates, he figured that the enemy wants to set a negotiation by using the Empire citizens that still alive and being captured during the Ginza incident. 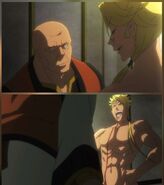 Marcus being scared by Zorzal in anime 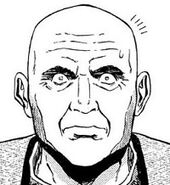