Episode 7
Mamina (マミーナ Mamīna) is a maid who works for the Formal Clan. During the Imperial Civil War, like Delilah, she serves the Loyalist and JSDF as assassin, berserker and warrior.

Mamina has a laid back and cheerful personality but she will become aggressive when her friend is in trouble or danger. As with all maids in the house she is loyal to Formal Clan as well as Kaine.

As a Warrior Bunny she has two long bunny ears as well as a bunny tail. She is usually seen wearing a formal maid uniform. Mamina has bright orange hair and red eyes.

Mamina was one of the survivors of the Empire's slave-war on the Warrior Bunnies three years ago. Nothing is known of her history except that she eventually came to be employed by Clan Formal as a palace maid.

During the Second Battle of Italica, she joins Delilah in their fight against Zorzal's remaining army.

As a Warrior Bunnies, she possesses her superhuman fighting power an sense. However, her skill is nowhere near Delilah.

Supernatural senses: As a Warrior Bunny Mamina has heightened hearing as well as better sense of smell than most humans. She is capable of hearing others from a considerably far distance. She also can detect shapeshifter's disguise easily.

Superhuman strength: she is strong enough to break armors of Imperial Soldiers with bare hand.

Superhuman speed and agility: she can run extremely fast and jump at high ground easily.

Nigh vision: she can see clearly in the dark without night vision equipment. 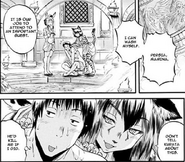 Persia and Mamina give Iami a bath manga chapter 49 page 26. 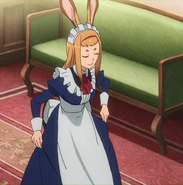 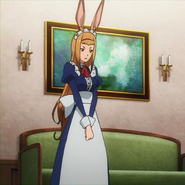 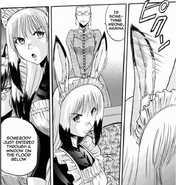 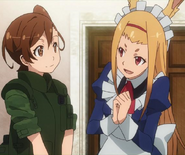 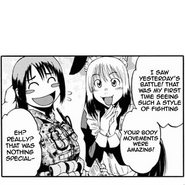 Mamina and Persia fighting the Haryo tribe assassins.
Add a photo to this gallery

Retrieved from "https://gate.fandom.com/wiki/Mamina?oldid=27657"
Community content is available under CC-BY-SA unless otherwise noted.