Gate - Thus the JSDF Fought There! Wiki
Register
Don't have an account?
Sign In
Advertisement
in: Humans, Male Characters, Characters,
and 2 more

Kōichirō Hazama (狭間 浩一郎 Hazama Kōichirō) is the Lieutenant General of the JSDF and the commander of Special Task Force. He is also one of Yōji Itami's acquaintances.

Hazama is a middle-aged man in his late years with short brown hair and a short mustache of the same color and thick eyebrows.

He is usually seen wearing an army uniform.

As a commander, Hazama has a very serious personality who is highly respected as a great commander both by the people of Japan and the Special Region.

Hazama had been a student of philosophy in Tokyo University, a graduate of that school which only accepted the best of the best. However, the truly inspiring part of his life story was how he enlisted as a private with the JSDF and climbed the ranks until he became the mighty Lieutenant-General he was now. One could say that, although he could have taken the fast-track, he chose to go the long way instead.

Sometime later, a Dark Elf named Yao Ro Dushi arrived at the Alnus camp in search of help. Due to not understanding the Japanese language, she nor the soldiers were able to understand each other. Fortunately, the soldiers asked Lelei La Lalena to help translate for them. Yao told Lelei of her plight, and Lelei spoke to Hazama about it. Unfortunately, Hazama is unable to help Yao; not out of distrust, but because her homeland, the Schwarz Forest, is in the Kingdom of Elbe, which they have diplomatic issues with.

When Yōji Itami slays the Flame Dragon with the help of his friends, he is suspended for going AWOL. Hazama arrives and gives Itami his commendations, much to his shock. Hazama tells Itami that he has been given a list of commendations; the Defense Minister gave him a grade one commendation for rescuing Noriko, King Duran of Elbe gives Itami a letter of thanks and a noble title, and the dark elves give him the title of honorary chieftain, a rock of adamantite, and ownership of Yao. Hazama tells Itami not to break any laws with her, and that he is to be reassigned to the Resource Investigation team and to begin searching the Special Region for resources once his suspension is over. 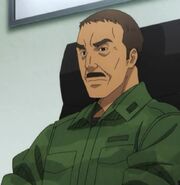 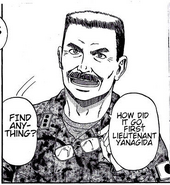