Anime episode 15
When Itami was in secondary school, his mother killed her husband (Itami's Father) in self defense due to domestic violence. As a result, this left Itami's mom scarred, depressed, and she hated herself for it ever since that day. She then blamed herself for it and rejected reality, even though many people tried to help her. One night, Itami snapped and forced his mom to face reality. This caused her to commit attempted suicide by lighting herself on fire while covered in gasoline. She was then admitted to a mental hospital where Itami left her ever since high school.

not much is known about Itami's mother, but she she appears to in her late 20s early 30s with dark brown hair.

Fifteen year old Itami and his mother not believing the reality of her killing his abusive father. 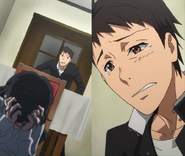 Teenage Itami drives his mother to madness by asking why she killed dad, episode15. 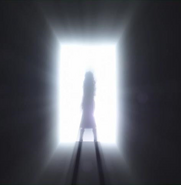