Goddess of the Underworld

Hardy (ハーディ Hādi) is the goddess of the underworld and ruler of hell. Her apostle is Giselle and her shrine is Bellnahgo Shrine.

Hardy is first brought up when Rory shows fear of riding the Tokyo subway during her first visit to Earth, when she reveals that Hardy has asked for her hand in marriage. Hardy is the one who opened the gate in Japan. Her primary reason for opening the Gate can be summed up as "Because she wants something new in her world that will likely get her interest piqued". Another reason is to destroy the ''old system'' of the Empire and teach them a lesson about humility by having them facing an enemy far more powerful than them indicating that she is aware of the tremendous military power of the JSDF over the Empire. She also doubts that Giselle can beat the JSDF showing that she takes the military power of the JSDF seriously unlike Zorzal and his pro-war supporters.

Despite being worshiped by most mortals in the Special Region, she is shown to be neglectful and indifferent with their devotion and suffering since she cares mostly for her own interests. Furthermore, she also believes strongly in the philosophy in natural selection in which she decided to look the other way when the Flame Dragon massacred hundreds of people because she viewed it as just a powerful tool for her to destroy the Gate to prevent more calamity of the space-time continuum as well as destroying the JSDF to maintain the balance of the underworld since the Flame Dragon is the only powerful thing in the Special Region that can give serious trouble to the JSDF. To her, human suffering and activities are just mere entertainment. As the result of her heartless and selfish approach to her subjects, Yao and the rest of the Dark Elves, formerly ardent worshippers, have since disowned her.

She was surprised, amazed and also shocked to see that a human like Itami could defeat the Flame Dragon. This causes her to realize that the JSDF is far more powerful than she initially thought. Furthermore, she also gains an interest in the world beyond the gate, when she discovers that Earth has multiple gods for different fields like Music, Wisdom or War, of which she finds quite amusing. However, much to her dismay, she realizes that none of the underworld gods from beyond the gate are a match for her taste since most of them are male (Yama, Hades, Anubis) and she even calls one of them ugly, especially Anubis due to his dog-like appearance. However, she eventually falls in love with Aphrodite, the Greek God of Love and Beauty, to the point that she makes Itami to promise her a trip to the world beyond the Gate; much to Itami's dismay since he's not even sure these deities really exist or not and the knowledge of them only came from the book of Earth Mythology owned by Lelei.

Several full Manga pages are here, click on an image to enlarge them 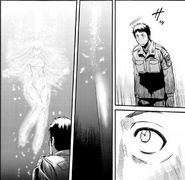 The introductory art of Chapter 58 shows Hardy playing the Empire against modern Japan to get the Empire to change.

Hardy explains how a gate connection between worlds is made Manga chapter 58 page 24.

Hardy shows her no-money-to-honey attitude as she scrambles the photo of her that snapped by Itami because Itami didn't make any offerings to her.

Hardy shows her soul collection to Rory 200 years ago.

Hardy expresses her admonishment as Itami compares her ability to take any forms she likes as plastic surgery. 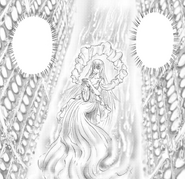 Hardy in her domain.
Add a photo to this gallery
Retrieved from "https://gate.fandom.com/wiki/Hardy?oldid=25708"
Community content is available under CC-BY-SA unless otherwise noted.