Grey Co Aldo (グレイ・コ・アルド Gurei Ko Arudo) is an imperial knight assigned under Princess Piña. However, in fact he is a veteran knight who also trained most the Rose-Order of Knights members when they were still kids.

Grey is depicted as a man with a serious and loyal personality. He often acts as Piña's voice of reason, once suggesting to the princess to simply apologize for the fiasco caused by Bozes when the Rose Knights kidnapped and tortured Itami. He is also shown to be very pragmatic and straight-forward man without much regard to ranking or status since he suggests Itami's gang to kill Zorzal to eliminate Norra's assassination attempt on Lelei much to Shandy's shock.

As Grey's name suggests, he has very short grey hair as well as grey colored eyes. In the manga he is a chubby man with balding head.

He was assigned by the Emperor to guard Piña. Following Piña's wish, at the age of 34, he trained the Rose-Order of Knights.

Grey is first seen silently sitting in a bar with Piña, where news of the Third Recon Team's encounter with the Flame Dragon is being circulated around the place.

Later, he helps fend off bandits from Italica.

In episode 19, Grey is seen traveling with Shandy to Rondel to pick up Lelei to bring her back to the capital. However, during the stay in Rondel, there were a couple of assassination attempts on Lelei. The group deduced that the Pied Piper was ordered to kill Lelei. Grey is seen helping Itami and the others protect Lelei. Shandy was also tricked, without anyone knowing, when she was sent to trach the Pied Piper. After Lelei successfully presented her work to earn the title of "Master," Grey helped the group realize that something big had happened in the capital if many of the bridges to Rondel were destroyed. The group returned to the capital as quickly as possible in Itami's Toyota high mobility vehicle. 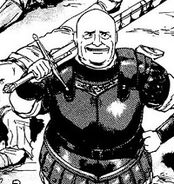 Grey Co Aldo in the manga. 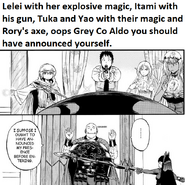 Young Pina approached Grey to ask him to train her and other future Rose Order Knights during his youth.
Add a photo to this gallery
Retrieved from "https://gate.fandom.com/wiki/Grey_Co_Aldo?oldid=25288"
Community content is available under CC-BY-SA unless otherwise noted.