Apostle, Cafeteria worker at Alnus (to pay back her massive debts)

Giselle  (ジゼル Jizeru) is one of the Twelve Apostles serving the god Hardy. She is a deity of the dragon folk, and she is also the second youngest of the 12 apostles. She considers herself a rival to Rory Mercury and is responsible for waking the Flame Dragon, to be exact she woke three Flame Dragons.

She is now an ally for Yonji's gang and the JSDF.

Giselle has a mischievous and playful personality. She seems to be very fond of her god Hardy. Despite this, they do not share the same sexual orientation whereas Giselle prefers men as opposed to how Hardy, a female deity, prefers women.

While usually plucky, Giselle is not without a sense of fear. She cowered when the JSDF destroyed Towato and Mowto, mistaking it to be a display of Itami's power.

After her experience with the JSDF and Itami's group, she becomes much more mellow and humble. At the same time, she also loses her interest in taming dragons since she asks Itami if she can have a gunship or rocket launcher of her own due to having witnessed the power of modern weapons in decimating her dragons. Furthermore, she became traumatized by Rory and the JSDF's bombardments during their attack on her two offspring dragons.

She is shown to be a voracious trencherman with massive appetite in which she often feasts herself tons of foods and drinks in a single meal. Due to her status as a Demigod, she likes to enjoy free food and drink as well as others services by a mortal in the Special Region. As the result, she is unprepared herself in Alnus since she unable to pay her food bills after stuffing herself due to the fact that there are no god temples in Alnus for missionaries or religious leader to offer to pay her. After Lelei plays loan shark with her, she falls into her knee and cries over her massive loan. After her time of hard labor in the Alnus cafeteria, she becomes much more pleasant and her arrogance vanish from her personality and she also becomes more sensitive to people. Although Yonji kills the Flame Dragon she tried so hard to breed, she seems to forgive him easily after Yonji gave her a delicious meal.

Giselle is a tall woman, where she physically looks to be around 20 years old and has gold-pupil eyes. Her deep blue skin is covered in tribal tattoos. She wears a very revealing sleeveless white gothic priestess’ outfit that is very similar to Rory's in terms of design. She has short white hair. Her most notable feature is her dragon wings.

Dragon Tamer: She is able to tame dragons and control them. Based on her experience, the taming of a dragon is a difficult and troublesome process.

Combat prowess: Giselle is seen carrying a Scythe. Like Rory, she is strong enough to be classified as a one-woman army, which shown during the Imperial Civil War since she manages to slaughter hundreds of Imperial Soldier by herself.

Flight: Giselle's wings allow her the power of flight.

Inhuman appetite: Giselle can eat a large amount of food ration that can feed 8 people and still feels hungry.

Scythe: Giselle owns an oversized scythe that has equals in cutting power and weight like Rory's halberd.

In the past, Giselle was raised by her mother, who was a very gentle woman that had urged her daughter to “be a good priestess." The lamented mother had been dead for several centuries.

She is 400 years old with an appearance of the early twenties. A demigoddess and an apostle of Hardy, the god of the underworld. She came from the Dragonoid tribe. She was armed with a great scythe and accompanied by an awakened flame dragon to challenge Rory. She had deep blue skin color and her whole body was covered with tribal tattoo. Her priestess clothes are frilled white goth clothes, but it has been tattered and couldn't cover her in various ways.

She once decapitated a female mage head off for using the spell to swap bodies with a kidnapped young woman.

50 years before the plot of GATE began, Giselle woke the Flame Dragon from its slumber to breed it with a Water Dragon. It resulted in two offspring which Giselle aptly named Towato and Mowto, and domesticated them. In addition, she wandered around the Special Region to find and bring Rory to her god.

While Itami and the rest of the group fight the Flame Dragon, Giselle finds Rory and battles her, noting that her strength is weaker than usual. When Itami comes to pick up Rory, Giselle is surprised that she was with a human. She tells Itami that when she battles Rory, she always loses, but because of the blood pact Rory formed with Itami, Rory was considerably weakened since she took all of his pain in the battle with the Flame Dragon. While Giselle is initially upset with Itami due to being a human, she finds him more interesting when the rest of the group points out that he defeated the Flame Dragon, and calls its offspring to assist.

Unfortunately for Giselle, the JSDF had arrived (due to Duran revealing his true identity as the king of Elbe and allowing them to enter his lands) and quickly killed the baby dragons. Giselle wonders what "power" she is facing, and when Rory reappears again with a group of attack helicopters behind her, Giselle promptly flees from the area.

During the Imperial civil war, she was ordered by Hardy to guide Itami and his party to the apocryph so that the Humans would be alerted to the consequences of the gate.

When Itami and co returned to Alnus, Giselle accompanied him. Assuming that Itami would cover every expense for living at Alnus, Giselle ordered and ate a large amount of food at a cafe in Alnus. Upon realizing she had to pay the bill herself, Giselle first begged Rory and Lelei for a loan, only to be unable to return the debt, Tuka then suggested that she work at the cafe to repay her debt. After spending a large amount of time as a waitress, Giselle becomes less arrogant and more compassionate to mortals, as she realized nobody would tip a mean waitress.

During the last stage of the Imperial Civil War, alien arachnids are swarming through the gate and overwhelming the JSDF and the Alnus mercenaries, Giselle comes to their rescue summoning every Wyvern she has, creating a whole flying army to decimate the forces of the alien arachnids, effectively driving them back and saving the defenders, thus settling her debt to Alnus. As thanks for her heroics, Rory decided to hide her debt from Hardy so that Giselle would not return to Belnago in shame.

Giselle as in printed works. Note her scythe rather than halberd to reap souls.

Giselle with wyverns to take Itami and the girls to investigate the black fog, Short Novel 8.

Giselle's action figure that worth 12000 yen 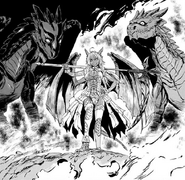 Giselle as a cafeteria worker in Alnus.

Giselle takes cover from JSDF bombardment in the anime.

Giselle shows her voracious appetite.
Add a photo to this gallery

Retrieved from "https://gate.fandom.com/wiki/Giselle?oldid=26120"
Community content is available under CC-BY-SA unless otherwise noted.