The elves of the Special Region are similar to depictions of elves in "high fantasy" fiction, being depicted as humanoid creatures with unique pointed ears. Elves are known as expert archers and are also known to be skilled in the use of spirit magic. Elves also possess extreme longevity, routinely living for over 300 years, though they are vulnerable to death by physical injury like humans. While they are nominally within the territory of the Empire, their relatively isolated villages in mountains and dense forests mean that they are, for the most part, de-facto independent. The Empire, for their part, have a racist attitude towards the Elves.

The elves are believed to have inhabited the Special Region since before the arrival of humans from a Gate opening at some point in the distant past. Much of the elvish lands were quickly conquered by humans because of the differences in culture, particularly how elves learn new skills, brought on by the supernatural longevity. Unlike humans, elves do not directly teach other members of their society new skills, but rather learn new skills by imitation, and perfecting these abilities over decades or even centuries before they become skilled themselves. On the other hand, because of their shorter lifespans, humans actively train others in specific skills, allowing them to quickly become specialists. Because of this, the human invaders could field far larger armies of trained soldiers than the elves. It is also implied by the relative populations of the races (and the fact that an over 150-year old elf like Tuka Luna Marceau has apparently never born children) that humans may have a higher rate of reproduction, also presumably due to their shorter lifespans. For these reasons, the elves were forced to retreat to isolated forests and mountains, where they retain de-facto independent enclaves away from factions such as the Empire.

Dark elves are a sub-race of elves with brown-colored skin, who seem to live in colonies separate from their fairer skinned counterparts. However, it seems that there are some interactions between the two races, as Yao Ro Dushi may have met Hodor Marceau, and at least knew of Tuka Luna Marceau and the fate of her village.

Elves and Dark Elves can enchant their arrow with spell so the arrow can fly at higher velocity than normal arrow. However, it is still greatly inferior to the velocity and damage of a bullet. It is later revealed that the enchantment spell can become much more powerful when uses with more powerful weapon. The prime example is Yao when she enchants her Type 64 rifle with the enchantment in which the bullet in the rifle fires at the velocity at the same caliber of armor-piercing bullet.

Elves and Dark Elves can use spirit magic for multiple purposes like making helicopter to fly silently by using wind spirit magic; summoning fog to cover the scouting operation; conjuring lighting (in the case of Tuka) or making people falls asleep. 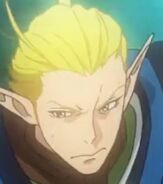 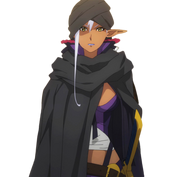 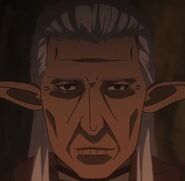 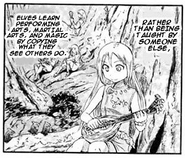 Yao explains to Itami that elves learn by copying rather than being taught as short lived species do.

Dark Elves raise their bow at the Flame Dragon.

Tuka and Yao in Earth-side clothing