Gate - Thus the JSDF Fought There! Wiki
Register
Don't have an account?
Sign In
Advertisement
in: Characters, Male Characters, Erbe Clan,
and 2 more

Duran (デュラン Duran), also known as the Lion of Elbe, is the King of Elbe Kingdom and was the commander of the Allied Army Godu Rino Gwaban during the third offensive of the Battle of Alnus Hill. He's a former vassal of the Empire, while currently he's allied with Japan.

Duran is a seasoned battlefield commander known for his quiet, harsh and intelligent demeanor. He holds in very high regard his pride as warrior and king, and he's one of the very few leaders native of the Special Region to be genuinely interested in the welfare of his people.

Duran seems to be friends with the Duke of Ligu, since he was visibly concerned with his death and wanted to avenge him by inflicting at least one casualty against the enemy. He seems to be popular with his people, as he was not distressed with Piña's threats when she threatened to have the Kingdom of Elbe destroyed.

Like many of the Special Region officers and nobility, Duran was initially quite arrogant, believing that the Allied Army's numbers would be able to overwhelm the inferior numbers of the JSDF. His countless experiences on the battlefield have shown him to attempt different strategies, such as a night raid when he had no other choice to defeat the JSDF. When his raid was foiled by the JSDF, he immediately knew how devastating their weapons were and ordered all of his men to charge before they would be cut down, though they were mercilessly slaughtered before they could reach them.

Following the battle, like the remnants of the Allied Army, Duran expressed horror at the strength of the JSDF. However, he did not blame them for his defeat, instead pinning it on Emperor Molt instead, correctly deducing that he had sent the Allied Army on a suicide mission as the Imperial Army was nowhere to be seen on Alnus Hill, and that if they had no army to rebel with, the Empire could continue holding onto their lands. He was also impressed with the civilian technology the JSDF provided, especially the prosthetic arm and leg he received as medical treatment.

Duran is first seen at Alnus Hill, where he and the other nobles discuss the Allied Army's strength against the enemy. After resting, on the next day, Duran rides out to battle with his men, where witnesses Alnus Hill "erupting" (which came from artillery strikes from the JSDF), and wonders where the King of Alguna, Mudwan and Duke Ligu are. There were approximately 10,000 deaths during this attack. Duran attacked again with even more men, but they were also repulsed, and they suffered 40,000 casualties. In the evening, Duran is in the commanding tent when he witnesses the remaining nobles fall in despair. Duran vows to get revenge on the JSDF, and due to their dwindling manpower, believed that a night raid would be the best option.

As the Allied Army made their way to the JSDF encampment at night, the JSDF fired several flares, revealing their attack; Duran noted that they were extremely bright. Duran was immediately aware that the JSDF had caught them and ordered all of his men to attack before they would be cut down. As Duran made his way towards the JSDF, he ran into some barbed wire and was knocked off his horse, but was quickly helped back up by his soldiers, who prepared a tortoise formation to protect him. Duran immediately told his soldiers to run, but before they could, they were cut down immediately from machine gun fire. Duran looked on in complete shock and horror as a bullet grazed his helmet. He later picked up a bow from a fallen soldier and shot an arrow at them. He wondered how this could've happened and began to laugh when a mortar shell struck him, leaving him badly wounded, and presumed dead by the Empire.

The ordeal caused him to lose both his left arm and left leg along with how the stress, from the near-death experience, has made his once black hair turn completely white. Duran is apparently very broad-minded as he showed no ill will towards the JSDF but instead directed his anger towards the Empire, specifically the emperor whom Duran describes as a fool that would recklessly charge at an enemy without having any plans or knowledge. He stated such to Piña, because the Empire was responsible for making Japan their enemy for which Duran had hoped that the Empire will suffer complete defeat. When Piña threatens to have the Kingdom of Elbe destroyed, Duran laughs, telling her that he would be with his people anyways if that happened.

He was later taken and treated by the JSDF’s doctors, though Duran initially lied that he was a farmer. He was extremely impressed with Japan’s advanced technology, particularly in the prosthetic arm and leg he received. Duran was later moved by Itami’s willingness to slay a Flame Dragon to help the dark elves, as well as Tuka. The task proved problematic since the JSDF couldn’t send a large force to pass the borders without dealing with the Elbe Kingdom. Thus, Itami was forced to go alone. This prompted Duran to later reveal his identity to the JSDF so that reinforcements would arrive to help Itami. At the time, Duran had deemed the JSDF to be trustworthy as he needed their help in reclaiming his kingdom from his eldest son, who had rebelled against his father and assumed the throne for himself.

While Duran offered to permit the JSDF to enter the Elbe Kingdom after helping him return to the throne, Yanagida pointed out that they could receive the same offer if they offered Duran's head to the crown prince. Ultimately, Duran was forced to give in to Japan’s demands which included exclusive rights to mine the Elbe Kingdom’s underground resources, along with tax exemption. Japan was willing to split any newly discovered precious metals but had the rights to claim all other resources that Duran had no knowledge of. Since then, Duran has apparently become an ally of Japan. He had also given Itami the rank of nobility for slaying the Flame Dragon, which gave the soldier a positive image that helped him even when he was given a list of punishments by his superiors upon returning to base.

During the Imperial Civil war, he supports the pro-peace faction and the JSDF in the war against Zorzal's army. During the Second Battle of Italica, he nearly loses his life after the helicopter transporting him was struck with metal chain-net from one of Zorzal's dragon riders. He was also shown to have enough strength to protect the helicopter crew and overwhelm Podawan's troops, killing the treacherous general himself when he let his guard down.

Duran is first seen marching into battle with his army towards Alnus Hill. When all the other Allied Armies were defeated, he decided to plan a night raid against the JSDF. During their attack, the JSDF used flares to uncover Duran's plans. He is last seen shooting an arrow at the JSDF before being bombarded by explosives. He was completely defeated in the battle. Later on, he is seen rehabilitating at Alnus Hill in a hospital, where he meets Itami one night and Yanagida during negotiations for Itami to enter Elbe to kill the Flame Dragon.

Duran later plays an important role during the offensive to retake the Imperial Capital from Zorzal, he and his men learned how to rappel from helicopters, and were later transported into battle by the UH-01 helicopters of the 4th combat group. During a Wyvern rider ambush, Duran uses his new prosthetic limbs to catch a spear, which was thrown by General Podawan, who intended to kill the pilot. Duran and Podawan later dueled, with Podawan gaining the upper hand, due to Duran's prosthetic arm, however when Podawan got overconfident and claimed that Duran shouldn't have injured his left hand by protecting the JSDF pilot, Duran reveals he had long-lost his left hand, and shoots Podawan with a hidden crossbow built in his prosthetic left hand.

Duran before the battle

Lord Duran and the Commanders in a meeting

Duran and his forces at night

Duran injured after the battle. 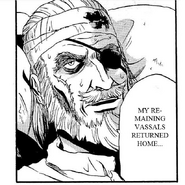 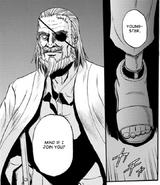 Duran fights off a Wyvern rider during the battle of Marais with the JSDF helicopter squadron.