Dragons are among a number of animal species similar to monsters in Western mythology discovered in the Special Region. The region appears to play host to multiple species of dragon. All the dragons encountered thus far by the Japan Self-Defense Forces share the same six-limbed (four legs and two wings) body plan, hard scales and powerful jaws containing rows of sharp teeth. Dragons in the Special Region are believed to have an exclusively carnivorous diet, presumably preying on large animals, including Humanoids and even smaller dragons.

The Common Dragon, also known to referred to as "flying dragons" by residents of the Special region, are by far the most common dragon species in the Special Region, and are the only ones known to have been domesticated by the Empire. These dragons are used as mounts for the Dragon Riders/Wyvern Corps of the Empire. These dragons appear to be trained to swoop down on enemy troops and attack with their claws and teeth, as well as allow the rider to impale enemies on their lance. It is unclear whether the flying dragons are capable of breathing fire like their larger cousins, the Flame Dragon. However, the presence of dragons near a burning building at the (anime version) Battle of Ginza suggest they may be capable of breathing flames, albeit with a much lower intensity than a Flame Dragon. The scales of flying dragons are very hard, capable of resisting small arms fire, though .50 caliber machine gun fire, explosives, and heavier weapons will easily bring them down. 35mm anti-aircraft autocannons are known to be particularly effective, as seen in the Second Battle of Alnus Hill. During the Battle of Marais, helicopter's rotor blade is strong enough to shred wyvern in to mince meats. In the Manga and Light Novels many translators call them wyvern. A wyvern has two wings and two legs, most dragons have four limbs and two wings.

Ancient Dragons are the strongest and most fearsome type of dragons. There are two known ancient Dragon types: Flame Dragon and Water Dragon. The Flame Dragon is the largest and rarest species of dragon found in the Special Region, with only one adult and two juvenile half-breeds encountered thus far. Flame Dragons represent the apex predator of the Special Region and are known to be extremely aggressive, capable of destroying entire settlements. The species is known to be extremely and hibernate for periods of up to 50 years before becoming active to feed and reproduce. Flame Dragons possess large wings, allowing them to fly at high speeds, as well as hover like a helicopter or VTOL aircraft. The main distinguishing feature is their ability to breath flames with firepower rivaling an air-dropped Napalm weapon, as well as their thick scales, which boast a hardness similar to tungsten and can resist practically any weapons used in the Special Region even magical weapons used by Apostles, as well as .50 caliber machine gun fire, shrapnel, autocannon fire, and other light to mid-caliber vehicle-mounted weapons. Only anti-tank weapons, artillery, and other heavy ordnance are capable of killing a flame dragon. The only flame dragon encountered in the Special Region was killed at the Battle of Mount Tube by the combined efforts of Yōji Itami, Lelei La Lalena, and Tuka Luna Marceau, using C4 explosives detonated with Tuka's lightning magic. Flame Dragons have not been tamed by anyone other than Giselle, an apostle and member of the Dragonoid race of humanoids. They are implied to possess some sort of mental connection with dragons, or simply a greater knowledge of dragon behavior, allowing them to tame even the Flame Dragon.

Water dragons are stated to exist by Giselle and a water dragon is said to have been the mother of the two flame/water dragon hybrids she used in her failed attempt to attack Yōji Itami and Rory Mercury at the Battle of Mount Tube. While they have not been encountered by the JSDF, they can be assumed to be an aquatic species, possibly similar to the sea monsters of myth.

Giselle bred two hybrids of flame and water dragons, which she named Mowto and Towato. These two dragons mostly share the anatomy of the flame dragons, though they were much smaller as they were still juveniles at the time of their deaths. Giselle attempted to use the dragons to attack Yoji Itami and Rory Mercury, but this was prevented when the JSDF arrived, killing the dragons with artillery and air-launched missile fire.

The process of taming dragons is unclear for both common dragons and ancient dragons. For common dragons, the Empire has a huge battalion of tamed dragons showing that taming a common dragon is not so difficult for humans. However, for ancient dragons like the Flame Dragon, Giselle states that the process is highly difficult and troublesome even for the Draconian clan, which specializes in taming all kinds of dragons.

Though the specifics are unknown, the Empire is able to tame common dragons /wyverns for their Wyvern Corps.

Dragon scale is often harvested to build tough defensive equipment. As the result, it is highly valuable in the market in the Empire. One piece of the dragon's scale in perfect condition was worth ten Suwani gold coins.

The value of the dragon's scale, beside the dependence on the condition of the scale, it is also depended on the type of Dragon since the scale of Ancient Dragon is infinitely expensive but most of all nearly impossible to obtain since no one in the Special Region can kill the Flame Dragon. According to Kato, the armor crafted from the scale of the Flame Dragon is valuable enough to buy a whole nation. Newborn dragon scales also massively valuable, however, like the Ancient Dragon scale, this type of scales is basically impossible to find in the market since it is impossible for man to hunt dragons, even if is just a newborn. The only way to obtain the skin of the Ancient Dragon was from the skin shed by dragons or newborn dragons during molting.

Despite the toughness of dragon scale in making defensive armor, the Imperial army doesn't equip their soldiers or generals with dragon scale armors due to the immensely high cost and the almost zero possibility to obtain. Furthermore, although dragon scale armor is tougher than normal armor used by Imperial soldier, it offers zero protection against firearms since rifle can still punch through the armor with sheer kinetic force but it is required more shots to do that. Most of the time, armor made from dragon scales only makes appearances in some tales of heroes and legends, and the item itself was worshiped inside the temple of the god of war.

As for wyverns, nations with wyvern riders had a steady supply of them, so these smaller scales were cheaper. One scale was between thirty to seventy Silver Denari. Wyvern scale can also be made into defensive equipment but less tougher than dragon scale.

Due to the fact that one Silver Denari could feed a person for five days, the Imperial army doesn't equip their soldiers or generals with wyvern scale armor because of this fact but most of all is the risk of killing their air combat troop's means of mounting to harvest the scale. Much like the dragon scale armors, it suffers the same fate when facing firearms. However, the wyvern-scaled armors are still a valuable defensive equipment in the Special Region since it is strong enough to protect against stabbing attack. The prime example is the dragon scale armor used by Lelei to protect her from Sandy's stab.

An Imperial dragon rider on his mount, a common dragon. 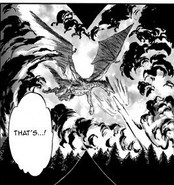 A flame dragon attacks a village with its fire breath

The flame dragon encountered by the JSDF.

Armor made from dragon's scale worn by Lelei in the manga.

A Wyvern Knight being shot down by JSDF Anti-Air Cannons
Add a photo to this gallery
Retrieved from "https://gate.fandom.com/wiki/Dragon?oldid=23690"
Community content is available under CC-BY-SA unless otherwise noted.