President of the United States of America

Chief-Executive, Commander in Chief of the American Armed Forces

Dirrel (ディレル Direru) is the President of the United States of America (POTUS). He acts as both an ally and an antagonist of Japan.

Like his fellow leaders, Dong Dechou and Zyuganov, Dirrel is an opportunist who plans to use the untapped resources in Falmart in order to benefit his country. He is also shown to be the most short-tempered of and impatient of the three heads of state as he explodes in a rage after the twin failures of the Hakone Incident and the attempted Ginza kidnapping. Despite this, he is still a skilled politician as he manages to ensure that the United States will still benefit from their military alliance with Japan.

President Dirrel is depicted as a middle-aged white man with blue eyes, and blonde hair.

Not long after the Ginza Incident, Dirrel meets with his cabinet and proposes a plan to send an invasion force through the Gate to colonize the Special Region in a joint military operation with the JSDF. However, several advisers point out to him that the American government cannot risk the international political backlash as well as the fact that they are still fighting numerous wars in the Middle East. He agrees that the JSDF can map the world beyond the gate and deal with the Empire alone. However, the President plans for the JSDF to exhaust itself and its supplies, which will allow the U.S. to step in and offer their support. Confident in his plan, he finalizes an agreement with Japan that, in exchange for economic concessions and access to the petroleum field and mining rights, the United States will provide ammunition, armaments, materials, military supplies, and weaponry, along with the threat of nuclear retaliation in the event of an invasion. He also provides diplomatic leverage at the United Nations in support of Japan’s claim of ownership of the Gate. Dirrel expresses an interest in obtaining DNA samples from the demi-humans in the Empire for genetic research.

However, as the war progresses and the JSDF enjoy continued success, Dirrel decides to use the Japanese Diet Hearing as a means to obtain an Imperial citizen. Secretly, he orders a kidnapping operation and, to further ensure that the operation is not obstructed, he threatens to publicly reveal information on corruption within the Japanese government and in exchange for their non-interference, he will allow the Japanese government to save face and force the implicated Japanese officials to honorably resign. After the failure of the CIA special operations forces in attempting to capture Rory Mercury, Tuka Luna Marceau, Lelei La Lalena, Pina Co Lada, and Bozes Co Palesti during the Hakone Incident, he decides to use the existing trade and military treaties to ensure that American corporations can still reap profits while excluding the other Superpowers. His direct aggression is downplayed and diplomatic maneuvers are emphasized.

After his term ends, he is replaced by Mahana as the President of the United States.

As he is the President of the United States his most obvious skills lie in his political abilities, as well as a talent to gain public support. 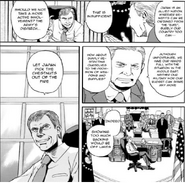 Dirrel suggests joint-military operations in the Special Region, but his advisers are against this idea due to the Middle East Terrorist Crises. He then settles for arms supply to the JSDF to reap profits.

Dirrel frustrated over the failure to the capture Rory, Tuka, Lelei, Bozes, and Pina.
Add a photo to this gallery
Retrieved from "https://gate.fandom.com/wiki/Dirrel?oldid=25927"
Community content is available under CC-BY-SA unless otherwise noted.