“Who cares about that? I am everything to me! Without me, there’s no point in this world! A world that treats me unfairly and refuses to acknowledge me can go die in a fire! Alright, isn’t there someone who’ll use me? I’ll do anything!”

Diabo express his mad desire for fame and acknowledgement even is mean becoming someone's puppet or making despicable acts.

Diabo El Caesar is the second prince of the Empire, the brother of Zorzal and Piña Co Lada as well as one of the possible heirs to the throne.

Diabo cares about his sister a lot. He will do anything to be the next heir to the throne because he knows his brother Zorzal is an idiot. However, he often overthinks himself and can easily under or overestimate the situation with ease. Like Piña and his father Molt, Diabo is realistic and pragmatic, but at a higher level due to his tendency to overthink. He is aware of how Piña allied herself with the JSDF, and correctly deduces that she would become the Empress due to their strength and cooperation.

Despite being highly intelligent as Pina and Molt, he is very egocentric, very much like Zorzal thinking that he is the only one sufficient enough to rule the Empire and no one else can take that right from him. However, as a stark contrast to Zorzal, Diabo's egomania stems from the poor choice of Molt in choosing a successor as he sees that his father was irresponsible for giving the Empire for a fool like Zorzal to ruin it to the ground as well as years being neglected by Molt and almost everyone else in the senate throughout his life. As the result, he develops a massive inferiority complex, which cause him to do anything to become Emperor in order to be someone worth-to-be-noted in the whole Empire rather than an non-existent member of a royal family, even it meant selling the Empire to Japan as vassal state.

“I won’t believe you anymore. In order to become an Emperor, I’ll need a great deal of military might, and you haven’t brought that with you. And you even tried to destroy the Gate. I will obey Her Holiness and become the puppet of Arnus’ townsfolk. I will become the regional governor of this territory. That’s a more realistic goal.”

Diabo being rational toward Rory's demand and rejects Liu's false promise as he is finally pushed in a corner without any other alternative.

After crossing the Gate into Japan, Diabo realizes there are many other countries on Earth; the United States, Russia and China were powers far greater than Japan and he decided to ally with China to become the next Emperor. In his desperate bid to become known, he became a puppet of the Chinese government, who were unwilling to honor their promise. When he was finally cornered with no other alternative, Diabo realized the consequences of allying with the other superpowers, who would abolish the monarchy, colonize their lands and strip it of natural resources, and eventually decided to stick with Japan much like his sister. Diabo also gives up his plans to become the emperor in the process, opting to become the governor of Alnus after Rory threatened him.

He is shown to quite generous when the time arises, as when Zorzal took over the Empire in his coup, Diabo released his servants, allowing them to take whatever they wanted in his mansion for their service. When he became the governor of Alnus, he also worked hard for the people and was constantly re-elected, though this was due to Rory threatening to kill him herself if he was a bad governor.

Diabo has long blonde hair. He wears clothes of a noble and has an aura of a noble around him.

Diabo was born as the second prince of the Empire and second line in succession. Despite being one of the smartest members of the family and capable successor to the throne, he lived a life of being neglected by his father and almost everyone else in the Empire due to his second-rate born. His neglectful childhood makes him develop the desire to be acknowledged.

He had plans to eliminate Zorzal and Piña as competitors by allying himself with someone else beyond the Gate.

He first appears talking to his brother, Zorzal, regarding the throne. When Zorzal claims that he will be the next emperor, Diabo warns him that their father doesn't really trust him.

When Zorzal forcibly took the throne, Diabo was quick to liquidate his holdings and prepare to leave the capital. It was his plan to gather supporters from the Superpowers to help him retake the throne.

He eventually found his way to Alnus, where he learned of Japan's plan to close down the Gate due to the catastrophic consequences of leaving a space-time continuum rift open too long. He didn't believe in the seriousness of the situation, thinking it a ruse by Zorzal, despite a goddess confirming of the impending dangers. He conspired with other citizens of Alnus to find a way to prevent that scenario from happening as, without the JSDF, Zorzal would be unopposed. They sought to contact the other powers from across the Gate to prevent Japan from shutting it down. As the result, he manages to make a deal with China to delay Japan from closing the gate. During this time, he learns that Japan is not the world Superpower and the others nations has far more powerful military than the JSDF. Therefore, he intends to hand Lelei to the Chinese in exchange for 10,000 heavily armed Chinese soldiers to kick the JSDF out the way and decimate Zorzal's force as well as taking the throne from Pina.

After the international sabotage of the Gate, his scheme of using China to leverage himself into the throne and stop Zorzal is exposed but he manages to redeem himself and becomes the Governor of Alnus. 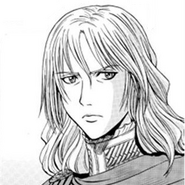 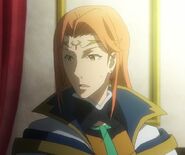 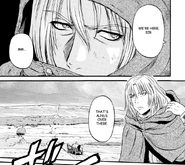 Diabo shows his generosity to his servants.
Add a photo to this gallery

Retrieved from "https://gate.fandom.com/wiki/Diabo_El_Caesar?oldid=25284"
Community content is available under CC-BY-SA unless otherwise noted.