Aina Kusuda
Delilah (デリラ Derira) is a warrior bunny, as well as a maid and spy for Formal Clan. She later serves as a berserker, infiltrator and assassin for the Loyalist army and JSDF.

Delilah has a cheerful personality. She is also shown to be very affectionate towards Itami. She calls him “Sir Itami“ like most of the people in Special Region do. Delilah's ultimate goal is to kill Tyuule, whom she thought to have betrayed her people.

In battle, she quite reckless since she often charge head-on against enemy without thinking in which often making the stealth operation of the JSDF in some huge trouble. She also seems to have no concept of teamwork during her time with the JSDF Special Force in which can potentially cause others team members to expose to the enemy. At the same time, she quite sadistic since she has no qualm in torturing hostages to make the enemy to do what she and her comrades want. The prime example is that she gleefully chops every fingers of Imperial Commander to make the Imperial army to back down during one rescue operation with the JSDF. Furthermore, she also not above using the body of a enemy as meat shield to charge head-on into the flock of enemy before unleashing her deadly blades upon the enemy soldier. As the result, these traits remind Yōji Itami a lot of the similarity with Shino Kuribayashi, such comments only to make her more savage.

She has very wild romantic approach toward with her boyfriend Akira Yaginada in which she often makes sexual advance toward him at the inappropriate time much to his chagrin.

During her residence in Japan, she wears a kimono during her work at Furuta's restaurant.

Three years ago, The Empire suddenly invaded the territory of the warrior bunnies. They were in search of slaves. At that time, the one who ruled their kingdom was Tyuule. The warrior bunnies killed many of the empire’s soldiers. In the end, it was the Empire that won. Tyuule sold herself as a sex slave to Prince Zorzal in hope to spare her people. However, she was deceived. The Empire killed her people without her knowledge. The Empire made it seem as if Tyuule betrayed her people to save herself. The Empire gave them the choice of either surrendering themselves into slavery or being put to death.

Delilah, refusing to become a slave, hid after regrouping with Griine and Parna, two of her fellow warrior bunnies. They decided to flee across the continent and vow revenge against Tyuule for her betrayal. They went from begging to thievery, then ultimately selling their bodies. One night, by a campfire, Parna decided to cut one of her ears because she could not bear living the rest of her life running and decided to become a slave. Thinking there may be the possibility of someone in Akusho taking her in as a concubine, seeing as they valued the bodies of warrior bunnies rather highly. She then took her leave.

One day while lying against a statue of Rory Mercury, she and Griine were approached by the head maid of Clan Formal. She asked if they had anywhere to go. Seeing as they did not they were invited to Italica. There they and many other humanoids were greeted by Clan Formal’s head, Colt. Colt being infatuated with humanoids and hearing of the horrors humanoids have faced, wished for his domain to become their home. And so, while they were poor, their people found a new home and some were even employed as the count’s housemaids. After the Siege of Italica, Delilah, Dora, Meldie, and Shiva were sent to Alnus by the Head Maid. The Head Maid told them that the community there had sent another request for workers and they were to depart the following day. As they were taking their leave, The Head Maid to spoke to Delilah privately, giving her the order to spy on the Japanese and send back reports of their activities.

After half a year, Delilah had become the head waitress at the local Inn and obtaining her own apartment in Alnus. One day she received a letter from Clan Formal, ordering her to kill the Japanese survivor Noriko Mochizuki and frame Princess Piña. Unbeknownst to her, the letter was in reality a forgery using Clan Formal's Seal in order to make it appear genuine, as part of a plot by former Queen Tyuule to spark a war. Delilah was forced to carry out this task due to her love and gratitude to Clan Formal. After finding her target, Delilah had trouble carrying out the order, as she did not really want kill Noriko though Noriko herself was passing through a personal crisis after being informed of the death of her family and wanted to die. The sight of Delilah prompted Noriko to remark that Delilah reminded her of Tyuule, startling the Warrior Bunny.

This was cut short when they were discovered by First Lieutenant Yanagida, who immediately engaged Delilah in battle. While Delilah managed to stab Yanagida, she received several shots from him in close proximity. Both were ultimately taken to intensive care by the rest of the JSDF. In lite novel volume 8 chapter 5 it is mentioned "Delilah had been put on trial in a Tokyo courthouse for what she had done in Arnus [Alnus], and she was sentenced to probation." By Anime GATE-24 she is recovered and taking care of First Lieutenant Yanagida.

During the Imperial Civil War, she joins Itami's group as assassin, infiltrator and berserker against Zorzal's force. Despite being admonished repeatedly from Itami and others JSDF for her reckless nature in battle, they still grateful for her fighting skill that helps them escape multiple dangerous situations from Zorzal's force.

After the end of Imperial Civil War, she finally learns the truth about Zorzal's deception and attend the ceremonial burial of Tyuule to honor her queen's sacrifice in killing the Zorzal, the very monster that brought destruction and misery to her clan.

After the Gate closes, she is trapped on the Japan's side. Despite this circumstance, she and Furuta open their restaurant in Japan. Thus fulfilling her late queen wish.

Like the rest of her clan, she has superhuman strength, speed and agility, which prove vital for JSDF during the Civil War against Zorzal's force since she serves as their assassin and melee berserker. She also strong enough to easily draw a bow to hit a target within 200 meters. Her bunny ears also very good for her in spying activities since she can hear the conversation and sound at a very far distance. As a Warrior Bunny, she doesn't need night vision equipment to find her targets in the dark because of her innate night vision. Her superhuman speed enables her to outrun armed soldier's reaction time to aim and reload their weapon in order to effectively dodge their shots.

According to Itami, Yaginada and most of the JSDF members, Delilah was good enough that she could operate alongside the Special Forces Group. Her movements, alertness, awareness, enemy-tracking ability, close combat proficiency and other skills were superior to that of any man in the Special Force even she aims only with bow and sword. However, her recklessness and lack of team work sometimes cause some trouble for some operations with the Special Force. 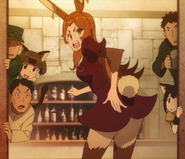 Delilah, "This ass is for show not to slap or grab!" From Anime Episode 11.

Delilah singing in Alnus begining of Episode 16 just before getting orders to assassinate Noriko.

Delilah displays her superhuman agility in the anime against the gun-wielding Akira Yaginada.

Delilah's after being shot by Akira Yaginada.

Delilah and First Lieutenant Yanagida as a couple in Gate 24. 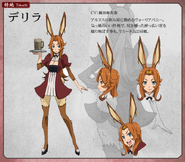 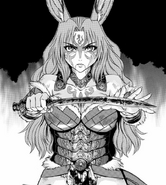 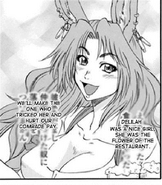 Delilah was loved by everyone at Alnus.

Delilah working at the Alnus tavern

Delilah fought the Imperial Army in the past

Delilah in one of her battle outfits. 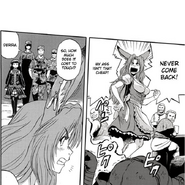 Itami teases Delilah after the kick seen in Skills and Abilities above. Manga chapter 26 page 11. 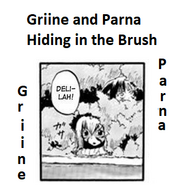 Delilah's flashback we see Griine and Parna hiding in the brush across the river Manga Chapter 40. 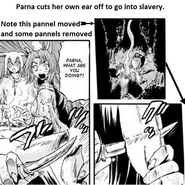 Parna cuts off her ear to become a slave while Griine and Delilah watch in horror, Manga Chapter 40. 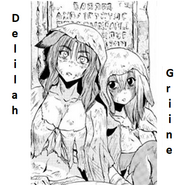 Deliah and Griine as found by Formal Clan's chief maid under a statue of Rory Mercury, Manga chapter 40 page 16. 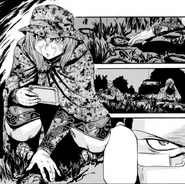 Delilah on the hunt for Norra the Pied Piper.

Delilah in a JSDF outfit.
Add a photo to this gallery

Retrieved from "https://gate.fandom.com/wiki/Delilah?oldid=28257"
Community content is available under CC-BY-SA unless otherwise noted.