Gate - Thus the JSDF Fought There! Wiki
Register
Don't have an account?
Sign In
Advertisement
in: Characters, Humans, Male Characters,
and 5 more

Cato El Altestan (カト・エル・アルテスタン Kato Eru Arutesutan) is the elder sage of the Coda village. His disciple is Lelei La Lalena. Cato is a magician who took in Lelei and her sister as disciples in magic. He took the role of a fatherly figure over the refugees evacuated to Alnus by Itami.

Cato is very experienced in magic usage. He is calm in most situations. As a sage, Cato is a very knowledgeable man. However, he can sometimes be perverted in which Lelei often beats him up for it.

Cato looks like an ordinary old man. He has his long gray beard tied together at the end as well as having gray hair. He wears blue wizard clothes as well as a blue wizard hat with a pierced ring in it.

Cato's Manga appearance is very different and his character is less the buffoon. He never wears a hat, but does smoke a pipe.

Cato once dueled Mimoza La Mer, but this resulted in a stalemate due to their comparable power.

Cato became master to Lelei at some unknown time. After using magic inappropriately to strip Mimoza's underwear, Cato flee to the Coda village to escape her wraith as she rampaged the whole research area of Rondel for a week in deep rage.

Cato is first seen fleeing from the Coda village with Lelei. Due to his lack of interest in climbing rank in Rondel, he still rank as a sage while his magic is powerful enough to make him as expert or arch-mage.

Magic: Cato is the one who taught Lelei magic. He is shown to be strong to conjure a explosive blast that can make reservoir. 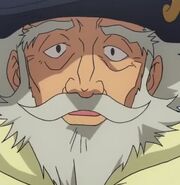 Cato and Lelei in Manga

Cato got blasted by Lelei for his perverted remarks about Lelei' sister.

Cato creates a reservoir with his powerful blasting magic 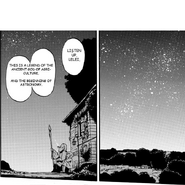 Cato in his youth as he tried to strip Mimoza's underwear.

The result of Cato's antic.