Mutsumi Tamura
Beefeater E Caty (ビーフィーターEカティー, Biifiitaa Ii Kati) is the captain of the Rose-Order of Knights. She is also a close friend of Piña Co Lada and one of her oldest acquaintance.

As a child, Beefeater was an energetic child who would easily get bored unless something exciting happened.

As an adult, Beefeater is a woman with great respect towards Piña Co Lada and is also her oldest acquaintance. She is also very kind and accepts orders from higher-ups without hesitation. Beefeater later develops a crush on Shunya Kengun, a JSDF Colonel, after he had saved her.

By the end of the anime, Kengun seems to have returned her feelings. In the novel, it is implied that Beefeater is a "fathercon" and is thus attracted to older men such as Kengun.

Beefeater is a woman with purple hair and periwinkle colored eyes. She wears the the standard knight's armor and green earrings.

In Princess Pina's Order of Knights, Beefeater was first seen murmuring about how she could quit knight school if it turned out to be boring. Two years later, Beefeater was regularly attending Knight school with several other noble children, she was extremely energetic and skilled, always fighting with two swords, and being able to beat both Norma and Herm at the same time.

When Pina made classes more serious, Beefeater was bored at every turn, during class she would lose concentration, and during physical training, she was easily able to do an infinite amount of (boring) jogging and pushups, while everyone else struggled.

When Pina announced her knight school's tournament, Beefeater decided against quitting school, and was soon shaking with excitement, her first event was a fencing match with Nikolasha Le Mon, who was scared to face to powerful Beefeater, however before the match begun, Norma reminded Beefeater that she was an illegitimate child, and therefore ranked lower than Nikolasha. Norma suggested that as lower rankers, they should let the higher ranking people win so that their pride remains intact, however Beefeater didn't care, she went all out with Nikolasha, dodging her first, and only blow, Beefeater then lept high into the air for a jumping slash, all while explaining to Norma that rank has nothing to do with battle, as a result, she smashed Nikolasha's sword, and held her own sword at Nikolasha's throat, Nikolasha then broke into tears and surrendered. During the final match, Beefeater was tasked with guarding her team's flag.

During a campout, Beefeater and the other students attempted to hunt wildlife for food, Beefeater was unable to shoot any deer, since her strategy for hunting was to rapidly lob arrows while yelling a battle cry. Later while draining the deer, she was one of two students who weren't disgusted by the sight of blood (the other was Suissesse) instead, she was trembling with excitement as she waited for Hamiltion to cut the deer's throat, and then had a look of curiosity on her face after the blood starting draining. When a storm threatened a nearby dam, Beefeater and the rest of the school volunteered to help repair and secure the dam. When Grey Co Aldo was washed away, Beefeater, Suissesse, and Hamiltion, were chosen to aid Pina with finding Grey. Beefeater was the first to arrive to Grey's rescue, she quickly killed a goblin with her two swords, and then proceeded to hack down the whole horde, she and Pina saved Hamiltion from an early demise then the latter was knocked down by a goblin, Grey then ordered Pina, Hamiltion, and Suissesse away, since he and Beefeater would be able to hold of the horde, however Beefeater reminded the others that there was someone else as interested in achievements as she was, as if on cue, Bozes arrived, having left Norma in charge of the dam, the group was able to hold out long enough for Norma to arrive with the entire knight school, who quickly killed off the goblin horde.

After the campout, Beefeater was seen sleeping in class, with Hamiltion trying to wake her up.

Beefeater makes her debut in Episode 20 in a tent near the Jade Palace conversing with Bozes about what was occurring around town, stating she had already deployed scouts to gather information. They soon found out that The Cleaners were causing all the ruckus and that they had marked the Jade Palace as their next target.

After Bozes requested her to speak with Sugawara once more about the meeting Casel wanted to have, this time with Sherry begging, she was the one to bring back his answer to Sherry and Casel. Once Sugawara granted them permission to enter Japan Territory, she was the one to give the orders to the Knights to prepare for battle against the Oprichninas.

After the battle was over, she and Bozes both went towards the rendezvous point, only to get stopped by Imperial soldiers and Bozes' horse getting shot. With that, she got Bozes on her horse and they both began running away from more Imperial soldiers.

She later attends Piña's coronation and admits her relationship with Kengun.

Beefeater and Bozes side to side. 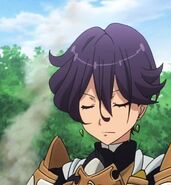 Beefeater getting Bozes on her horse to escape.

Beefeater and Bozes sitting discussing the ruckus around town.

The two admitting their relationship

Beefeater at the start of the first battle of Jade Palace.

Young Beefeater lecturing Norma in the middle of a duel

Beefeater in the Princess Pina's Rose Order of Knights comic

Beefeater introduces herself to Colonel Kengun in the Jade Palace, Manga chapter 78 page 27. 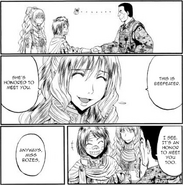 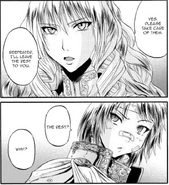 Bozes Co Palesti puts Beefeater E Caty in command of the knights guarding the Jade Palace for their retreat page 34 of manga chapter 78.

Beefeater as a knight-in-training, a decade ago.

Retrieved from "https://gate.fandom.com/wiki/Beefeater_E_Caty?oldid=27288"
Community content is available under CC-BY-SA unless otherwise noted.