Arpeggio El Lelena is the older stepsister of Lelei La Lelena, who is, like her, a student of Mimoza at the Magic Academy in Rondel. She mainly focuses on alchemy and more specifically the study of minerals. This field is quite expensive in her world and receives little funding, causing her to live a life of poverty. In order to make extra money, she copies books by hand as the printing press has not been invented in the Special Region.

She is extremely jealous of her sister's exploits, has a very short temper and has even fought with her sister in a series of magic battles thirteen times. Neither one ever has intention to do serious harm to the other, though their last fight resulted in severe property damage. Deep down, Arpeggio has great affection for Lelei, going as far as knitting new clothes for her.

Her competitive and jealousy for Lelei is so big enough that she willing to do anything to beat her sister even trying to marry Itami due to his noble status. '

Magic: Despite being inferior to Lelei, in terms of academic achievement, Arpeggio is capable of fighting her little sister in equal terms.

High Intelligence: While not as intelligent as Lelei, Arpeggio is very knowledgeable when it comes to minerals.

Magical Beads: she carries the ring with lines to three magical beads that fires multiple blast of magic whenever she swings them pointed at a target. In the anime, the beads has much more sleek design than the manga, which involves three big beads with different shapes at the end. Furthermore, in the anime, the handle of the beads is designed to be worn in whole hand while in the manga, it is designed to be carried with only a finger.

Magical Staff: she carries a magical staff in her left hand. The staff is only seen in manga. 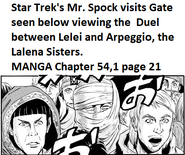 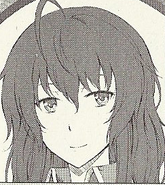 Arpreggio pours the soup bow on Lelei's head out of pure jealousy of her talent, money and love life

Arpeggio's magical beads in the anime

Lelei and Arpeggio face off for a duel in the Light Novel vol 5 chap 3.

Arpeggio's magical bead in the manga

Arpeggio fires a magic blast with her hand

Arpeggio carries a magical staff in her left hand

Flat proposed to Alfe according to Mimoza Manga chapter 68 page 11. 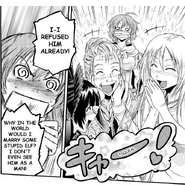 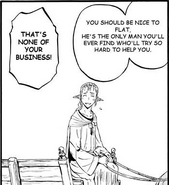