Start a Wiki
The Appia Highway is one of the major roads in the Empire. It runs east from Sadera which is situated in the west where it splits into roads to Telta and into the territory further to the west, presently unexplored by the JSDF. The highway meets the southbound Dessria Highway at the important crossroads city of Italica, before continuing east to Crety, travelling beyond the Rho River and into the desert regions to the east.

The Romalia Mountains, viewed from the Appia Highway.

The city of Italica, the crossroads of the Appia and Dessria highways, visible entering the city. The Appia enters from the east and west and the Dessria from the south. 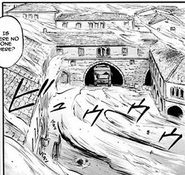 JSDF vehicles entering Crety on the Appia Highway.
Add a photo to this gallery

Via Appia was the Name of a Road in the Roman Empire which connected the capital of Rome with important Cities of the Province Magna Graecia in southern Italy like Capua, Beneventum or Tarentum.

Retrieved from "https://gate.fandom.com/wiki/Appia_Highway?oldid=14578"
Community content is available under CC-BY-SA unless otherwise noted.