Alnus (アルヌス Arunusu), located on Alnus Hill, is a community originally created as a base of the Japan Self-Defense Forces deployed to the Special Region. Initially, Alnus consisted mostly of tents and other mobile housing, defended by barbed wire and entrenched with vehicles and weapon emplacements. After the Battle of Alnus Hill, the base was greatly expanded with the construction of structures serving as barracks, mess halls, command centers, armories, firing ranges, motor pools, and landing facilities for both helicopters and fixed-wing aircraft. The base was the first, and thus far only area in the Special Region with the full-scale use of modern electricity, indoor plumbing, and cell phone services. The base is defended by large concrete walls with guard towers, turrets, and anti-air gun emplacements, in a star-shaped pattern similar to that of an 18th century bastion fort.

After the refugees from the Flame Dragon attacks were brought back by Yōji Itami, housing facilities were constructed for the refugees. It eventually became a full fledged community as the JSDF started to garner more support and establish friendlier relationships with local communities, with Alnus gaining the amenities a regular town would have, such as: living quarters, bars, stores etc.

It is also one of the few places in the Special Area where humanoids and humans freely coexist.

Alnus is governed by Prince Diabo as democratic state.

The main command center, which includes the office of Lieutenant General Kouichirou Hazama and is the largest building at the base, a three-story structure near the base center and Gate.

JSDF barracks are located at an unspecified location in the base, likely in the central area of the base, with the other important JSDF structures.

The Special Region side of the Gate is located in the center of the base, near the Command Center, contained in a dome-like structure to restrict access. Several roads lead out from the Gate, allowing vehicles to be transported through and back.

The JSDF is known to have motor pools, presumably in the outer wall of the structure, along with large numbers of Type 74 tanks, Komatsu LAVs, and other military vehicles.

The civilian community is located outside of the base, surrounded by a separate set of walls, and started as a refugee camp, but has since become home to workers and merchants as well. These residences are some of the first places in the Special Region to feature electrical lights and (presumably) power outlets, though the latter are not typically used by Special Region inhabitants; With the exception of Lelei La Lalena's laptop, they obviously do not own electronic devices.

A helicopter pad is located near the central command center. Further helicopter landing space, as well as an airstrip for fixed wing aircraft was constructed outside the walls of the base.

Another large structure at the center of the base is a fully functional hospital complete with surgical and medical facilities. This hospital provides medical care to wounded JSDF personnel (of which Akira Yanagida is the only one known to have been wounded in Special Region service), as well as medical care for Special Region residents as part of the JSDF's humanitarian efforts. Wounded survivors of the Battle of Alnus Hill, including Lord Duran received treatment here. The humane treatment of prisoners end up surprising the Imperial POWs.

Outside the walls of the base, the JSDF has set up various firing ranges for small arms, machine guns, tanks and artillery, and even helicopters. The remains of Imperial wyverns from the 2nd Battle of Alnus Hill were originally used as targets. The scales of the Dragons were later collected by refugees from Coda Village and sold in Italica.

An aerial view of the Alnus base.

The base at Alnus, anime version 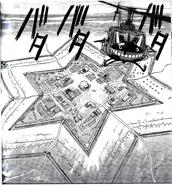 A distant view of the base on Alnus Hill 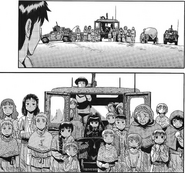 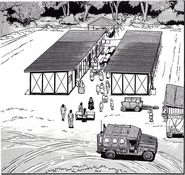 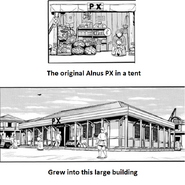 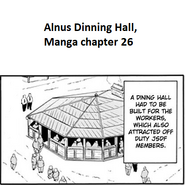 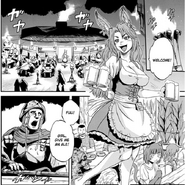 Nite time view of Alnus Dinning Hall and Delilah, Manga chapter 26 page 9.
Add a photo to this gallery
Retrieved from "https://gate.fandom.com/wiki/Alnus?oldid=24489"
Community content is available under CC-BY-SA unless otherwise noted.