Start a Wiki
Akusho (悪所, lit. "evil place"), also known as the Red Light District, is a district in the Empire where rape and poverty is a common thing. The district is mostly ruled by bandits and thieves. Akusho is located at the lowest level in the capital's slums. It is a melting point for Humanoids and Beastman of all races. Ordinary residents in the capital city don't come to Akusho where crime and violence are a part of everyday life. The known ruling crime lord families of Akusho are Gonzori, Medusa, Paramount, and Bessara.

The Bessara family later met its downfall when trying to engage JSDF but was ultimately decimated as a result of the ensuing skirmish. The surviving crime lords all agree to work with the JSDF after witnessing the overwhelming power the JSDF had displayed.

Most of the Akusho's resident and prostitute aware of the covert operation of the JSDF against the Empire in Akusho but they choose to ignore due the superior firepower of the JSDF against the Empire as well as the fact that the JSDF pays them handsomely to spy on the Empire's inner circle, supplying them with items or supporting them with foods and suppliers from the blockage of Zorzal. As the result, the cooperation between JSDF and the Akusho's crime lords as well as resident becomes stronger than ever. Unlike the idiotic Zorzal and his pro-war faction, the crime lords see the JSDF as legitimate business partners and a very profitable source or income.

It is shown that all Akusho's resident and crime lords greatly dislike Zorzal due to his blockage preventing them to access outside resources and hampering crime lords's activities. 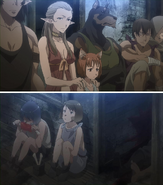 Residents of Akusho showing the poverty there two frames from Video episode 13. 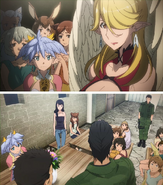 Prostitutes of Ashuko tell Japanese of impending earth-shake Video episode 13.
Add a photo to this gallery
Retrieved from "https://gate.fandom.com/wiki/Akusho?oldid=22119"
Community content is available under CC-BY-SA unless otherwise noted.